Born in Montpelier, Vermont, in 1823, Thomas Waterman Wood was primarily self-taught. His earliest works, sketches of the Vermont landscape done in 1844 and 1845, reflect the influence of the Hudson River School and English landscape painting.

During the late 1840s and 1850s, Wood supported himself in a variety of ways that included sketching a farmer’s livestock, designing furniture (his father was a cabinet-maker), painting portraits, and painting signs for the Vermont Central Railroad.  He married in 1850, and by 1852, he had established a studio in New York City, specializing in portraiture. He continued his self-education with visits to the exhibitions of the National Academy of Design, the Düsseldorf Gallery, and, in 1853, the Crystal Palace. Wood also traveled to Canada, Washington, D. C., and Baltimore, where he probably started painting genre scenes. In 1858 he exhibited for the first time at the National Academy of Design.

In 1858 Wood also went to Europe to study contemporary European art and to fulfill commissions for his American patrons. He visited the National Gallery in London and spent the winter of 1858-1859 in Paris, where he frequented the Louvre, the Luxembourg, and the studio of Thomas Couture. He sent a genre painting (La Chiffoniere, unlocated) to the 1859 National Academy spring annual exhibition. Wood toured Italy and Switzerland before returning home in August of 1859.

Wood lived in Nashville, Tennessee, from 1859 until 1862, and then moved to Louisville, Kentucky, where he stayed until 1866. He made many studies of life in the South, which served as the basis for his genre paintings. When he moved to New York City in 1866, he specialized in genre painting, and won recognition for his work.

Wood was an active member of the New York art world until his death in 1903. He kept a studio in the prestigious Tenth Street Studio Building from 1874 until his death. He was elected an associate of the National Academy of Design in 1869 and an academician in 1871. He taught at the Academy from 1875 to 1877, served as its vice-president from 1879 to 1891, and as its president from 1891 to 1899. He helped to organize the New York Etching Club in 1878 and was president of the American Watercolor Society from 1878 to 1887. He was also a founding member in 1883 of the American Art Union and served as its vice-president until 1885. For fifty years, Wood spent his summers in his hometown of Montpelier, Vermont, and in 1895, he established the Wood Gallery of Art there, donating many of his works and that of his contemporaries to the museum. 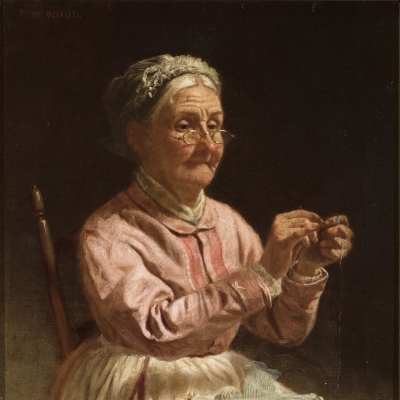