As a young man, Thomas Birch immigrated from Warwickshire, England, to Philadelphia with his family. He received a brief classical education in addition to studying with his father, the miniaturist and engraver William Russell Birch. Thomas Birch began exhibiting watercolors in the 1790s, assisted his father in preparing the engraved volume The City of Philadelphia in the State of Pennsylvania as It Appeared in 1800, and turned to oil painting around 1805. He showed landscape and marine views at the first annual exhibition of the Pennsylvania Academy of the Fine Arts in 1811, and continued to exhibit there for the rest of his life. He also served as the keeper of the Academy from 1812 to 1817.

Birch was best known for his marine paintings, which descend stylistically from the tradition of seventeenth-century Dutch painting. Birch knew the work of Dutch painters Jan van Goyen and Jacob van Ruisdael directly from examples in his father’s collection, among other sources, and his consistent interest in atmosphere derived from these precedents. Birch employed Dutch devices to classic effect in his depictions of numerous naval engagements from the War of 1812. These battle scenes found an appreciative, patriotic audience which could recall the role of each incident in the course of the war, and they helped to establish Birch’s reputation as America’s foremost marine painter of the period. 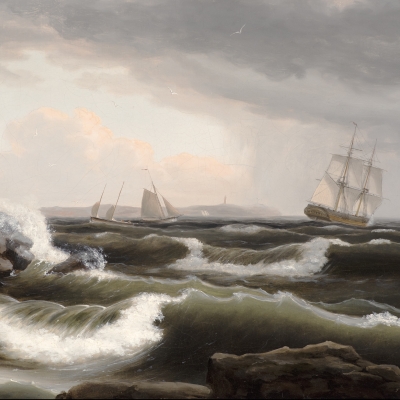