Born in Newport, Kentucky, and raised in Wheeling, West Virginia, Thomas Anshutz later moved to Brooklyn, New York, to pursue art studies at the National Academy of Design in New York City. In 1873, he enrolled in a drawing class taught by Lemuel Everett Wilmarth, in which the students sketched from ancient Greek and Roman sculpture casts. This type of study appears to have been too restrictive and academic for Anshutz, so he moved to Philadelphia in 1875. There he enrolled in the life class at the Philadelphia Sketch Club, taught by Thomas Eakins, who was to become the dominant influence on Anshutz’s early art and teaching. In 1876, the Pennsylvania Academy of the Fine Arts reopened in its new building on Broad and Cherry Streets, and Anshutz immediately enrolled in classes taught by Christian Schussele. Although the Pennsylvania Academy’s curriculum was similar to that of the National Academy in New York, there were significant differences between the two schools that appealed to Anshutz: the Pennsylvania Academy offered a larger selection of courses, and, due to Thomas Eakins’ influence, it emphasized study from real life and anatomy classes rather than from classical casts.

Eakins had once observed that “there are no lines in nature,” a statement which had a profound impact on Anshutz’s painting style. Because of this, Anshutz employed broad, general areas of light and dark when drawing or painting, instead of rendering what he saw in a detailed, linear manner. Both he and Eakins regarded the linear approach as superficial; they wanted instead to capture underlying mass and structure through form and color. During the years of 1877-1879, the majority of the paintings Anshutz produced were landscapes.  Of these, most were river views, often using strong horizontals and a scarcity of human presence similar in feeling to earlier Hudson River School artists. 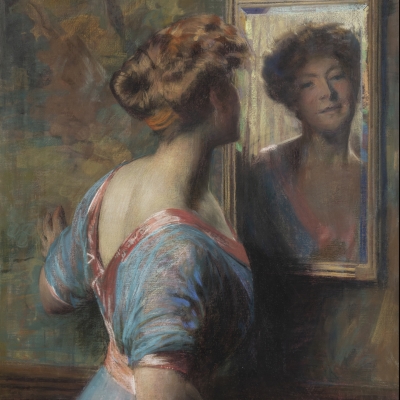