Seymour Joseph Guy was born in Greenwich, England, and, like his English-born contemporary J. G. Brown, he became one of America’s most successful painters of the American domestic scene. Guy was orphaned as a boy and raised by a guardian who disapproved of his desire to become an artist. Nevertheless, in 1847, Guy was apprenticed to the portrait painter Ambrosini Jerome, a woman with royal patronage who taught her young pupil meticulous technical skills. In 1854, at the age of thirty, Guy immigrated to the United States and settled in New York City. Initially he painted portraits, but he soon established himself as a genre painter and was especially noted for his images of children. Guy was an extremely talented artist and his technical skills were highly refined. Guy’s painstaking painting technique was time-consuming and as a result, he was less prolific than some of his contemporaries.

Guy began to exhibit at the National Academy of Design in 1859 and was elected an associate member in 1861, and an academician in 1865.  He exhibited at the Pennsylvania Academy of the Fine Arts in 1862, 1866, and 1868. Beginning in 1862 he contributed regularly to exhibitions at the Brooklyn Art Association. He was a charter member of the American Watercolor Society and he joined the Artists’ Fund Society and the Century Association. Guy maintained a studio in the famous Tenth Street Studio building from 1867 until his death. 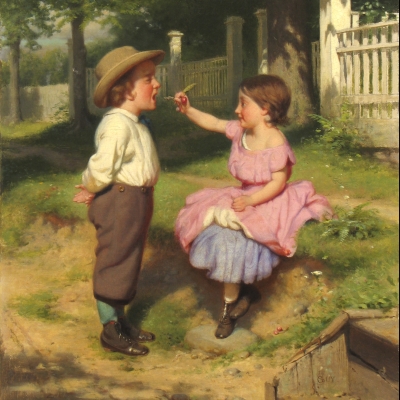