Perhaps the most famous American still-life painter, Severin Roesen was born in Boppard-am-Rhein, Germany, between Frankfurt and Cologne. His training remains obscure, but he was active as a porcelain dealer in Cologne and exhibited there in 1847. Late in 1847, Roesen fled his debts and settled in New York City, where the demand created by an exhibition of German art earlier in the year ensured his early successes at the American Art-Union in the late 1840s and early 1850s. In 1857 Roesen began to paint in a number of Pennsylvania towns, such as Harrisburg and Huntingdon. He finally settled in the lumbering town of Williamsport in 1860 or 1861, producing a large number of still lifes for residents who became well off during the mid-century logging boom.

Severin Roesen exhibited his paintings at the American Art-Union from 1848 to 1852 and at the Pennsylvania Academy of the Fine Arts in 1863.  His works are mainly in private collections but also hang in museums such as The Metropolitan Museum of Art and Brooklyn Museum, New York; Wadsworth Athenaeum, Hartford, Connecticut; Smithsonian American Art Museum, Corcoran Gallery of Art, and the White House, Washington, D.C.; Carnegie Institute, Pittsburgh; Butler Institute of American Art, Youngstown, Ohio; Nelson-Atkins Museum of Art, Kansas City; Museum of Fine Arts, Houston; Amon Carter Museum, Fort Worth, Texas; San Antonio Museum of Art, Los Angeles County Museum of Art, and the Santa Barbara Museum of Art. 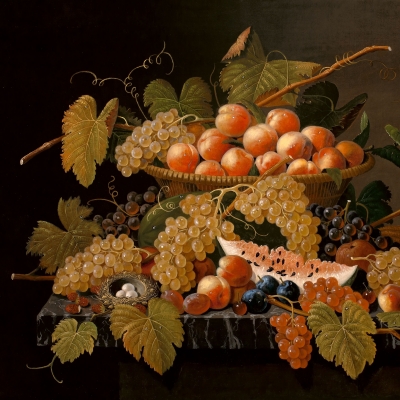