Robert Gwathmey was born in Manchester, Virginia. From 1925 to 1926 he studied at the Maryland Institute of Design in Baltimore and from 1926 to 1930 at the Pennsylvania Academy of the Fine Arts with Franklin Watkins, Daniel Garber, and George Harding. He traveled to Europe in 1929 and 1930, and again from 1949 to 1950. He married Rosalie Hook, of Charlotte, North Carolina, in 1935. Gwathmey taught for most of his career, first at Beaver College in Glenside, Pennsylvania, from 1930 to 1937, then at the Carnegie Institute of Technology in Pittsburgh from 1939 to 1942, and at the Cooper Union in New York City from 1942 until 1968. In New York he was represented by ACA Galleries from 1941 to 1961 and subsequently by Terry Dintenfass, with whom he had a long affair. He retired to Amagansett, Long Island, near the artists’ colony at East Hampton.

After teaching in Philadelphia and Pittsburgh and painting a mural for the Federal Works Agency during the 1930s, Gwathmey established his reputation in the early 1940s with sympathetic images of African-American sharecroppers in the South. Although his artistic career was far removed from their poor, hardworking existence, he visited their farms and even picked tobacco at a North Carolina farm in 1944 in order to accurately represent their experience. At a time of increasing awareness about the racial divide, especially in the South, Gwathmey’s images of sharecropping symbolized the unequal status quo that had existed since Reconstruction.

As Abstract Expressionism became popular during the 1940s, Gwathmey stuck to figural representation as the best way to convey his social realist message. His early and frequent use of commercial imagery presaged the techniques of Pop Art in the 1960s. 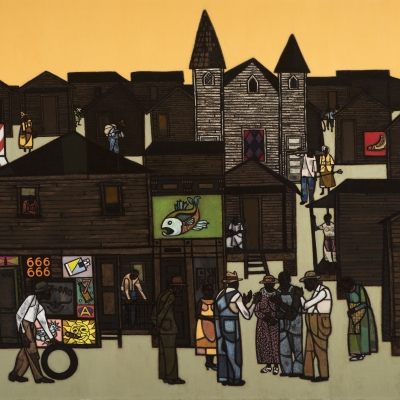