A beloved and admired figure among many Hudson River School painters, Richard William Hubbard was a close friend of Sanford Robinson Gifford.  A native of Connecticut, Hubbard graduated from Yale University in 1837 and moved to New York City, where he studied painting under Samuel F.B. Morse and possibly Daniel Huntington.  From 1840 to 1841 he studied abroad in England and Paris, where he was influenced by the landscapes of Claude Lorraine.  He returned to the United States in 1842 and settled in New York City, where he lived for the remainder of his life. For many years he maintained a studio on Washington Square, and he later moved to the famous Tenth Street Studio Building. Hubbard’s favorite subjects were chosen from the Hudson River Valley, and he seems to have focused most of his attention on locations throughout New York and New England. 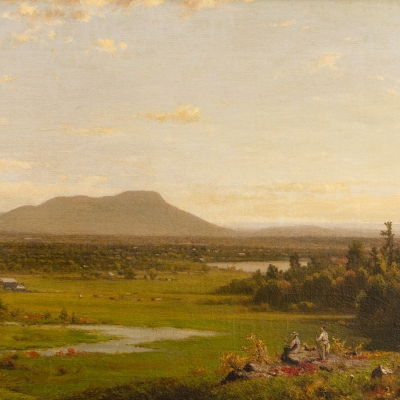