Richard Hayley Lever was born in Adelaide, Australia, and began his artistic training at the Prince Alfred College. Upon graduation he attended James Ashton’s Academy of the Arts in Adelaide, where he was encouraged to paint out of doors. Around 1894 Lever moved to England, settling in London. In 1899 he moved to the fishing town of St. Ives in Cornwall, home to a thriving artists’ colony of both European and American painters. There Lever studied painting with the British marine painters Julius Olsson and Algernon Talmage, both of whom were strong proponents of plein air painting.

After a trip to the Continent in 1908, Lever was introduced to the works of Vincent van Gogh and from that point on, his palette became more vivid, his brushwork bolder, and his compositions more linear and two-dimensional. He returned to St. Ives and resumed painting harbor scenes in the spirit of Van Gogh. During this period his harbor scenes garnered acclaim in England, and he made an auspicious American debut at the Carnegie Institute’s International Exhibition in 1910. He continued to show his paintings in America, securing his standing in the international art community.

Inspired by his American success, Lever immigrated to the United States in 1912, settling in New York City, where he continued his prosperous painting career. He spent summers on the Massachusetts shore, in Gloucester and Rockport. He was immediately charmed by the villages’ similarities to his dearly loved St. Ives. Lever later opened a studio in Gloucester that he maintained for twenty years, and where he painted numerous scenes reminiscent of his earlier St. Ives works. In addition, Lever also worked in Pittsburgh, on Nantucket and Monhegan Islands, and on Long Island.

From 1919 to 1931 Lever taught at the Art Students League in New York City and showed in numerous exhibitions throughout his career. He was a member of the National Academy of Design, National Arts Club, New Society of Artists, Royal British Artists, Royal Institute of Oil Painters, and the Royal West of England Academy. His works are displayed in art institutions throughout the country, including The Metropolitan Museum of Art and Brooklyn Museum, New York; Los Angeles County Museum of Art, Baltimore Museum of Art, Corcoran Gallery of Art, Washington, D.C.; and the Detroit Institute of Arts. 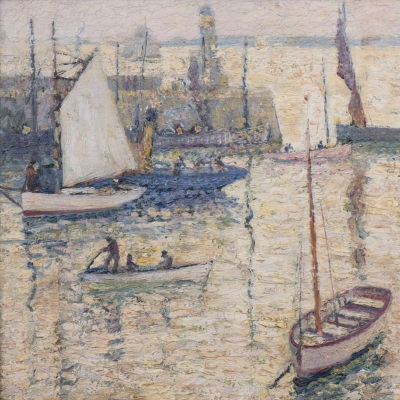