Richard Caton Woodville is ranked among the most prominent names in American genre painting. Due to his untimely death at the age of thirty, Woodville produced a small but impressive body of work that shows him to be a talented observer of antebellum society and politics. Woodville was born in Baltimore, Maryland, to a family of wealth and privilege. He began taking drawing lessons at St. Mary’s College during the 1830s and later enrolled in the University of Maryland medical school. After one year he left school to follow his passion to become an artist.

Woodville went to Düsseldorf in 1845, and remined there for the next six years while studying at the Düsseldorf Academy. While there, he continued to paint genre scenes, and his work evolved to include more complex narrative scenes with highly detailed still-life elements, as in Old ’76 and Young ’48, 1849 (Walters Art Museum). Woodville sent many of his paintings back to America for sale and exhibition at the American Art-Union, such as Card Players, 1846 (Detroit Institute of Arts), and War News from Mexico, 1848 (Crystal Bridges Museum of American Art). In 1850 Woodville lived in Paris and London where he continued to create genre scenes of American subjects, such as Waiting for the Stage, 1851 (Corcoran Collection, National Gallery of Art), and The Sailor’s Wedding, 1852 (Walters Art Museum). Woodville died in London in 1855, due to an accidental overdose of laudanum.

Woodville exhibited at the American Art-Union, which produced engravings of his paintings. He also showed his work at the National Academy of Design, Pennsylvania Academy of the Fine Arts, and the Royal Academy, London. Most of the approximately twelve known works by Woodville are in museum collections, including the New-York Historical Society and National Academy of Design, New York; National Gallery of Art and Smithsonian American Art Museum, Washington, D. C.; Walters Art Museum and Maryland Historical Society, Baltimore; Detroit Institute of Arts, and the Amon Carter Museum, Fort Worth, Texas. 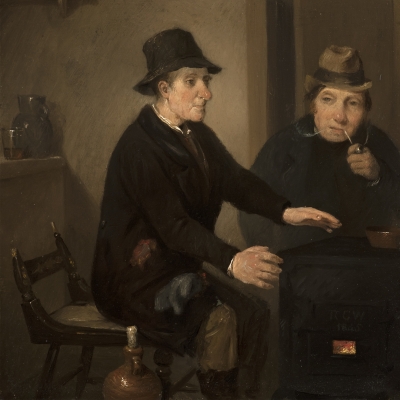