During his long career, Martin Johnson Heade produced a varied body of work that included portraits, landscapes, and still lifes. The son of a farmer in the rural town of Lumberville, Pennsylvania, Heade acquired an early appreciation of nature. He first studied with the folk artist Edward Hicks, whose naïve painting style influenced Heade’s early work. Heade made his professional debut in 1841 by exhibiting a portrait at the Pennsylvania Academy of the Fine Arts. Two years later, he moved to New York and began to exhibit his work at the National Academy of Design.

Heade went to Europe in 1848 and upon his return to America in 1850 worked as an itinerant portrait painter, a pursuit that took him to such cities as Providence, Rhode Island; New Orleans, Chicago, and Saint Louis. In the mid-1850s he began to show an interest in landscape painting and returned to New York to take a studio in the Tenth Street Studio Building. There he met the Hudson River School painters Sanford Robinson Gifford, John William Casilear, Asher B. Durand, and Frederic Edwin Church, with whom Heade formed a lifelong friendship.

Heade was an inveterate traveler for most of his life. He went to Brazil in 1863, to Nicaragua in 1866, and to Colombia and Jamaica in 1869 and 1870. He painted the exotic landscapes of these locales while continuing to paint still lifes of roses and other flora. Heade finally settled in Saint Augustine, Florida, in 1883, at the age of sixty-four. Although he continued to paint luminous scenes of the Florida landscape, he found particular inspiration in indigenous flowers such as magnolias, Cherokee roses, and daisies, which he painted in vases or placed on fine tablecloths. These paintings were well received for their beautiful and highly realistic arrangements. 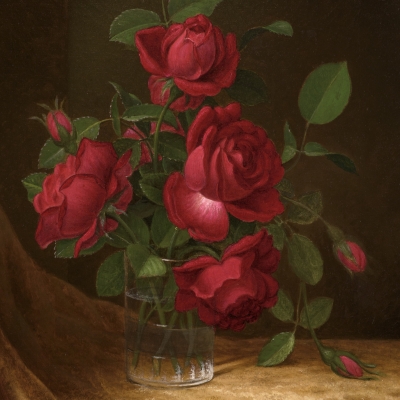