Louis Charles Moeller was a master of American genre painting. His meticulously detailed, highly finished paintings of late Victorian interiors received considerable critical attention during his lifetime, and they were purchased by some of the most prominent art collectors of the late nineteenth century, most notably Thomas B. Clarke. The inhabitants of Moeller’s Victorian parlors, offices, and social clubs are most often elderly, silver-haired gentlemen of various occupations, such as lawyers, booksellers, and connoisseurs. These congenial men are shown conducting business, looking at art, or having animated discussions over the news of the day. Their well-appointed surroundings are cluttered with Victorian bric-a-brac: tables are piled high with papers, books, and objets d’art. These fascinating paintings provide a delightful and informative view of late nineteenth-century life and taste.

Louis Moeller was born in New York City in 1855. His first teacher was his father, an ornamental painter of German descent. Moeller then went on to study at the Cooper Union, and from 1871 to 1873 he worked at the National Academy of Design under the noted genre painter Lemuel Wilmarth. Like many American art students of the post-Civil War era, Moeller decided to go to Europe for further instruction and departed for Munich in 1873. He remained there for the next six years, developing his precise, detailed style while studying with Wilhelm von Diez, whose own work was based on the Dutch “Little Masters” of the seventeenth century.

Moeller returned to New York in 1882 and immediately began to exhibit the small anecdotal genre scenes (his paintings rarely exceeded 18 x 24 in.) that would establish his reputation. He opened a studio, and subsequently became a regular exhibitor at the National Academy of Design, which elected him an associate in 1884 and an academician in 1895, the same year that he moved to a house in Mount Vernon, New York.  A few years later, his financial success allowed him to move again, this time to an estate in Edenwald, in the upper Bronx. In 1917, he moved to Weehawken, New Jersey, where he died in 1930. 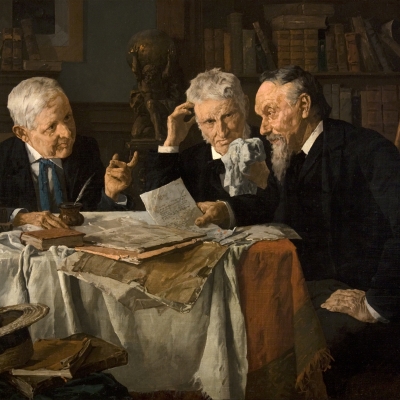 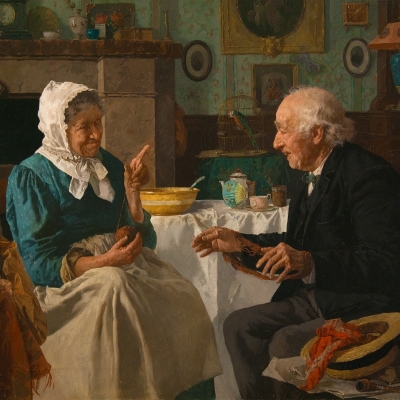