A native of Springfield, Massachusetts, Joseph Whiting Stock’s career as an itinerant portrait painter began as a result of a tragic accident at age eleven which left him paralyzed from the waist down.  One of Stock’s physicians suggested he learn to paint, and arranged for him to take lessons from Franklin White, a pupil of portraitist Chester Harding.  Another doctor commissioned him to execute anatomical illustrations for his lectures and helped him to become mobile with a special chair adapted for Stock’s injuries.  This mobility opened up a new world for Stock, one in which he could travel and earn his living as an artist.

Stock traveled throughout New England, setting up temporary studios in the towns he visited. News of his talents circulated and he received regular commissions. For about fourteen years, he kept a detailed diary, which is an invaluable source of information, not only about Stock’s own life and work, but about nineteenth-century itinerant artists in general.  Stock set up a daguerreotype shop in Springfield with his brother-in-law in 1844, but continued to travel to fulfill portrait commissions.  His career is significant in light of his ability to overcome his physical handicaps, his prolific output and his meticulously executed portraits. He is best known for his charming full-length portraits of children, which often include pets and toys, all of which provide a glimpse into the lives of the sitters. 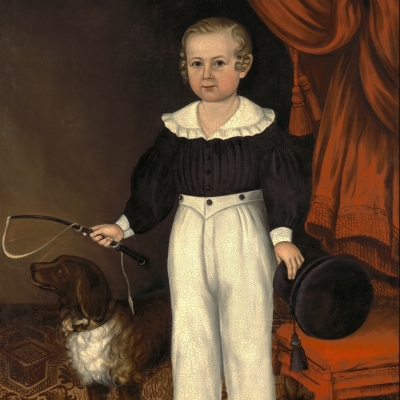