An important painter of still lifes, Joseph Decker was born in Wurttemburg, Germany in 1853.  In 1867, the Decker family immigrated to America and settled in Brooklyn, New York, where he lived for the rest of his life with the exception of travel and study abroad.  In 1875, Decker was enrolled in the National Academy of Design, the same year he advertised himself in the Brooklyn City Directory as a painter.  At the Academy, Decker studied under John George Brown, Thomas Waterman Wood, and with Lemuel Wilmarth, the first American pupil of Parisian master painter Jean Leon Gerome.  Decker was a fellow classmate of William Michael Harnett, the noted tromp l’oeil still-life painter. To help supplement his income, Decker became a photograph painter, and by the time he finished classes at the Academy in 1879, he had saved enough money to study at the Royal Academy in Munich, Germany.

Decker returned to Brooklyn in 1881 and from that point on he focused on painting still-life subjects in the American Pre-Raphaelite tradition.  He was particularly fond of painting branches of fruit shown close-up and rendered in minute detail. These paintings also echoed the influence of William Harnett’s tromp l’oeil effect.  Decker’s work also reflects that of his contemporaries such as William John McClosky, who specialized in wrapped citrus subjects, and Levi Wells Prentice, who painted fruit set in natural settings in a hard-edged style.

Around 1890, Decker’s crisp style inexplicably changed.  He began to paint in a looser, more atmospheric style with a softer, more tonal color palette.  These “soft” compositions were placed either in dark or neutral-colored settings. Perhaps, like the work of his contemporaries Emil Carlsen and George Inness, this softer style reflected his interest in and appreciation of the atmospheric still lifes of the famous eighteenth-century French painter Jean-Baptiste Chardin.

Decker exhibited at the National Academy of Design from 1882 to 1896.  He also showed his work at the Society of American Artists, Pennsylvania Academy of the Fine Arts, Art Institute of Chicago, Brooklyn Art Association, and at the Fine Arts Exhibition of the Second Buffalo International Fair in 1889. He also exhibited at Art House, New York, in 1893 and 1894, which was owned by Thomas B. Clarke, a major art collector and patron of the artist.  Decker’s work is housed in prestigious public collections, including the National Gallery of Art, Washington DC, Yale University Art Gallery, and the Pennsylvania Academy of the Fine Arts. 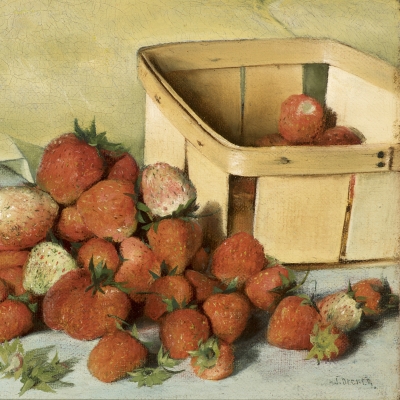