John Williamson was born in Toll Cross, Scotland, near the city of Glasgow. He immigrated to the United States with his family in 1831 and settled in Brooklyn, New York. Williamson studied at the Graham Art School and the Brooklyn Institute. By 1850 he had exhibited at the National Academy of Design and he continued to contribute paintings to the annual exhibitions for the next thirty-five years. Noted for his landscapes in the Hudson River School style, Williamson traveled up the Hudson River to Lake George, painting in the Catskill and Adirondack Mountains. He also traveled throughout New England and painted in the Berkshire, White, and Green Mountains, as well as the Mohawk and Connecticut River valleys. During the early 1860s, he developed an interest in painting still life, favoring lilacs, morning glories, cherries, and raspberries. Around 1870 Williamson was in the West, where he painted works such as Mouth of the Yellowstone and Overland Route to the Rocky Mountains.[1]

Williamson was elected an associate of the National Academy of Design in 1861.  Many of his paintings show his awareness of the work of Thomas Cole and Sanford Robinson Gifford. He exhibited at New York venues, including the National Academy of Design, American Art-Union, and the Brooklyn Art Association, as well as in Boston and Washington D. C. He was a founding member of the Brooklyn Art Association. Williamson’s work can be found in such public collections as the Brooklyn Museum, Maier Museum of Art, Randolph College, Lynchburg, Virginia; and the Hudson River Museum, Yonkers, New York. 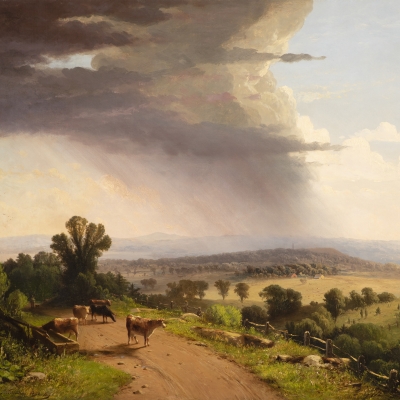 John Williamson
Passing Shower, Upper Valley of the Connecticut River 1870
Back To Top