John William Hill was born in London, England, the son of the engraver John Hill. His family immigrated to America in 1819, initially settling in Philadelphia. Four years later, they moved to New York where Hill began his artistic training as apprentice under his father for the next seven years. During this time, Hill worked on aquatint prints for William Guy Wall’s Hudson River Portfolio (1820-1825) and his work from this period greatly resembled Wall’s style. He began exhibiting at the National Academy of Design in 1828 and in 1833 he traveled to London to study old master paintings. That same year he was elected an associate of the National Academy of Design, where he exhibited regularly.

From 1836 to 1841, Hill was a topographical artist for the New York State Geological Survey and created many images for two of their natural history publications.  He was later employed by the New York firm of Smith Brothers for whom he painted watercolor views of many American cities to be published as lithographs. He made extensive trips throughout New England and upstate New York.  During one of these trips around 1855, he read John Ruskin’s Modern Painters, which advised “the earnest loving study of God’s work of nature” as the basis of the reform of painting. Profoundly impacted by Ruskin’s writing and the Pre-Raphaelite philosophy, Hill changed the direction and style of his painting. From this point on he devoted himself to working directly from nature.  Hill executed detailed pictures of birds’ nests and animals, as well as closely observed paintings of wildflowers, gardens, and landscapes, executed with a keen focus on minutiae.

An active member of the art community, Hill was one of the founding members of the New York Watercolor Society.  By 1860, he was a close friend of Pre-Raphaelite painter Thomas C. Farrer; by 1863, Hill was elected President of the Association for the Advancement of Truth in Art, a group dedicated to Ruskinian and Pre-Raphaelite ideals.  His later paintings were completed around West Nyack, New York where he lived with his father from 1838, and where he remained until his death in 1879. In 1888, he was posthumously honored in a work titled An Artists Memorial, written and illustrated by his artist-son, John Henry Hill.

Hill exhibited extensively at the National Academy of Design between 1829 and 1879, and at the Brooklyn Art Association between 1862 and 1884.  His work can be found in prestigious collections and institutions, including The Metropolitan Museum of Art, Corcoran Gallery of Art, Washington D.C.; Peabody Essex Museum, Salem, Massachusetts; New-York Historical Society, Museum of Fine Arts, Boston; Field Museum of Natural History, Chicago, and the Thyssen-Bornamisza Collection. 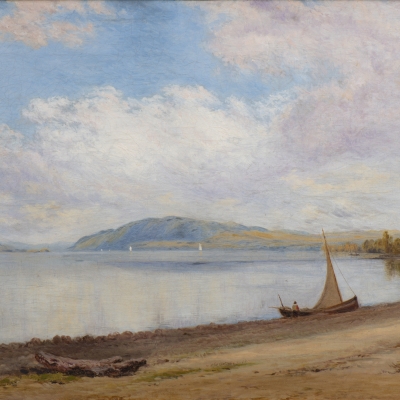