John William Casilear was born in New York City, and in 1827 began work as an apprentice in the studio of the engraver Peter Maverick. After Maverick’s death in 1831, Casilear continued his studies with Maverick’s pupil, Asher B. Durand, who recognized his artistic talents and encouraged him to paint.  Later that year, Casilear and his brother founded their own highly successful banknote engraving business that eventually became the American Bank Note Company.  Casilear made his first appearance at the National Academy of Design in 1832 with engravings after important paintings of the day, and one year later was elected an associate of the Academy. In 1836, however, he sent two landscape paintings, and in 1838, he wrote to his good friend John Frederick Kensett about his preparations for a summer sketching trip to the Catskills, declaring: “The fields shall be my workshop and ‘everlasting hills’ and the leafy denizens my only study. With what real pleasure…do we dwell on the future, especially when it is arched by the bow of providence and presents a picture wrought…by the fancy fingers of imagination.”[1]

In 1840 Casilear traveled to Europe with Kensett, Durand and Thomas Rossiter. Upon his return to America he established a studio with Kensett and the portrait painter Louis Lang and began in earnest to paint and exhibit the landscapes that made him an academician in 1852.  Casilear was popular among his fellow artists, who found him to be “one of the most genial of artists, he is never out of humor….He is surrounded by his pictures and his books (he is an omnivorous reader) and his walls indicate association with all the leading artists of the country. Here hangs a Kensett, a lovely little English view, there a Cropsey,…yonder a Gifford, above it a Colman, over the table a Durand, a vigorous Inness, one of Brown’s earlier pictures, a Moran, a Hart, and numerous others…”[2]  His work was purchased by many of the leading collectors of the day, including Marshall O. Roberts, Robert L. Stuart, and Robert M. Olyphant.

The success of his engraving business allowed him to devote himself to landscape painting in 1857. He returned to Europe that year, spending most of his time in Switzerland, and opened a studio in the famous Tenth Street Studio Building in 1858. He took frequent sketching trips with his fellow artists to the Catskill, Adirondack, and White Mountains, as well as to the Genesee Valley, painting forest interiors and river scenes. Clearly enamored of the Swiss landscape, he also created finished works from his European sketches for many years after his visit. 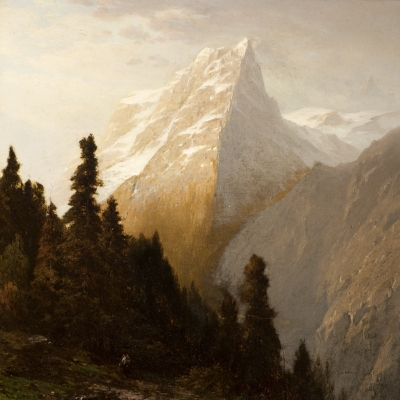