John Marin was trained as an architect and did not decide to become a serious artist until he was almost forty years old. Marin developed a highly personal and inventive technique, which emphasized motion through spontaneous handling of media, especially watercolor. In 1948, Marin was voted “America’s Artist No. 1” by a Look magazine poll of museum directors and artists, and his fame continues today as one of the most important and innovative American artists of the early twentieth century.

Born in Rutherford, New Jersey, Marin was raised by his maternal grandparents in Weehawken, just across the Hudson River from New York City. He took up drawing as a young child, and as a teenager, made quick, expressive watercolor sketches of the landscape around his grandfather’s farm in Delaware. Thus he developed an early appreciation for the outdoors, as well as a talent for the demanding medium of watercolor, which remained his favorite mode of expression for the rest of his life.  In 1886, Marin enrolled in the Stevens Institute of Technology, but left after half a year to work as a draftsman in a New York architectural firm. He ran his own architectural firm for five years before enrolling in the Pennsylvania Academy of the Fine Arts in 1899.

Marin left Philadelphia in 1902 to continue his studies at the Art Students League of New York. Afraid that he would never settle on a career, Marin’s family urged him to go to Europe, and in 1905, he sailed for Paris.  While he always claimed to be indifferent to the Parisian art world, he showed his work at several important Salons, and almost certainly attended the Cézanne memorial exhibition of 1907.  Further proof of his involvement in artistic circles was his membership in the New Society of American Artists in Paris, to which Alfred Maurer and Max Weber also belonged. Marin was extremely productive during these years, and it was at this time that he settled on the subject matter that would occupy him for the rest of his life—the landscape and the cityscape.[1]

Perhaps the most significant event of Marin’s stay in Paris occurred in the summer of 1909 when he met the photographer Alfred Stieglitz, with whom he shared an extraordinary, lifelong relationship of mutual trust and respect. Stieglitz considered Marin the quintessential American artist; he never faltered in his support, and showed Marin’s work in virtually every exhibition held at his various galleries in New York: 291, Intimate Galleries, and An American Place. 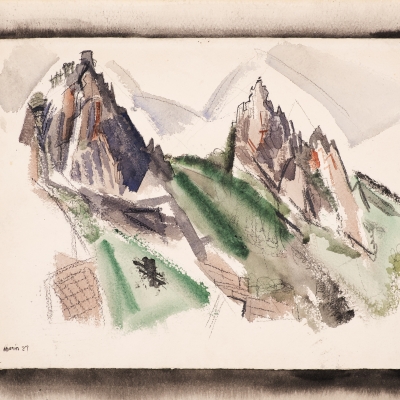