One of the major still-life painters of the nineteenth century, John F. Francis was born in Philadelphia in 1808. He began his career in the 1830s as an itinerant portrait painter, traveling from town to town in central Pennsylvania to depict important members of each community. In the late 1840s, as competition from daguerreotypists threatened his career as a portraitist, Francis turned to painting still lifes, which were then enjoying a revival. His elegant arrangements of naturalistically depicted objects brought him considerable success, and by the mid-1850s he was painting still lifes exclusively.

Francis’ style of still-life painting emerged from the tradition of another Philadelphia painter, Raphaelle Peale, whose work Francis probably saw in his youth. In his mature style of the 1850s Francis retained Peale’s solid and convincingly volumetric forms, but he distinguished himself from Peale, as well as from most mid-century American artists, with his painterly style. His elaborate compositions, however, are more characteristic of still lifes of the period. Certain similarities to Severin Roesen’s work, such as Francis’ attention to textures and his use of landscape views, suggest that both painters were drawing on European sources and expressing the nation’s optimistic mood. 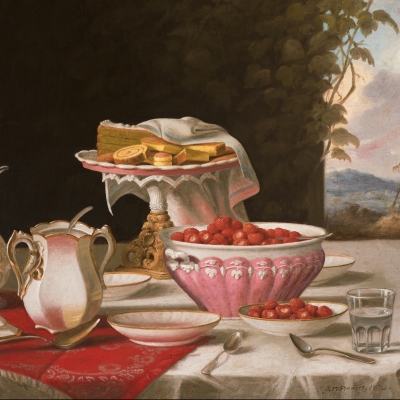