By 1804 Evers moved with his family to New York City. Evers' artistic career began after he exhibited some architectural drawings at the American Academy of the Fine Arts in 1816, where they received some notice.

Evers studied with John Joseph Holland (c. 1776–December 16, 1820), a well-known British scenic artist, who had arrived in America in 1796. Evers, along with fellow painter Hugh Reinagle (c. 1790–1834), worked for Holland from 1811 through 1820 at the old Park Theater in New York. For almost two decades thereafter, until 1839, Evers remained at the theater continuing the work of his predecessor.  It was Evers, according to some sources, who produced the very first “picture drop" curtain used in America, which depicted the trial of Queen Catherine of Aragon.

Along with other prominent artists, John Evers was one of the founders of the National Academy of Design in 1825. Many of Evers’ colleagues, including Thomas Cole, Asher B. Durand, and Samuel F. B. Morse, felt that the American Academy of the Fine Arts, which was the leading arts organization in New York City at the time, failed to provide sufficient teaching opportunities for both artists and their students. A group of younger and more progressive artists decided to break away from the American Academy, and formed what became the National Academy of Design. Evers would be involved with the institution for the remainder of his long life, exhibiting there with some regularity early in his career.

The first year he showed at the National Academy was 1830, when he exhibited a view of Lake George in upstate New York and a view of the Savannah River in Georgia (it is not clear if the second work was done from life or was produced from already known images). Also during the 1830s, Evers took up the art of painting miniature portraits. Though few of these works have come to light, at least two are known to exist, both located in the collection of the New-York Historical Society. The first depicts his teacher John Holland, while the second is a self-portrait as a young man.

Evers continued to exhibit on and off at the National Academy over the next two decades. The subjects he exhibited included typical Hudson River School landscapes (Lake George and Lake Champlain), as well as southern scenes. He also exhibited scenes of New England, including works depicting views in Vermont and Connecticut, and scenes in New Jersey. Other New York State scenes, including views of Troy and Fishkill, were also part of his oeuvre. Evers also painted an occasional landscape near his birthplace in Newtown, Long Island.

Following his work at the Park Theater, Evers took up work as a painter of dioramas, panoramas, and political banners. Evers’ artistic talents remained in demand and by the early 1860s he was working for other theater groups in New York City, designing and painting scenery for their productions.

In about 1865 Evers relocated to the picturesque village of Hempstead, Long Island, where he spent time as a boy and where some of his relatives still lived. He became well known in the community and was often spotted taking walks through the village. Not long after his arrival, Evers began painting scenes of the village, in particular its bustling streets, grand hotels, and churches. In addition, he painted the homes of many of his friends and neighbors. He also painted interiors and their fittings, including the chancel of St. George’s Episcopal Church and the drop curtain located in Liberty Hall.

Evers’ views of the village of Hempstead are bright and rich in color, often focused along its main thoroughfares such as Front Street, and rarely depict commercial buildings devoid of life. Most of his paintings, which nearly always include multiple buildings, also depict all manner of animals, including dogs, cats, chickens, and horses. People of all ages and types are shown moving around within his canvases, traveling, walking, shopping, or playing. There is always “life” in a John Evers painting – something probably learned from his many decades of work in the theater.  Noted art historian William H. Gerdts remarked in his monumental work Art Across America: Two Centuries of Regional Painting 1710-1920, that Evers’ paintings depict “…lovely and colorful views” of the region.

After many decades of artistic work, in about 1881 Evers stopped painting as his health and eyesight declined. During the last years of his life, he lived in the home of his relative John A. Bedell. 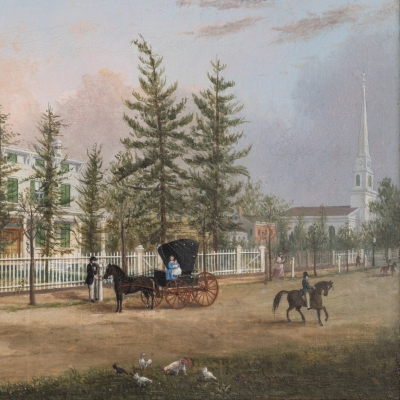 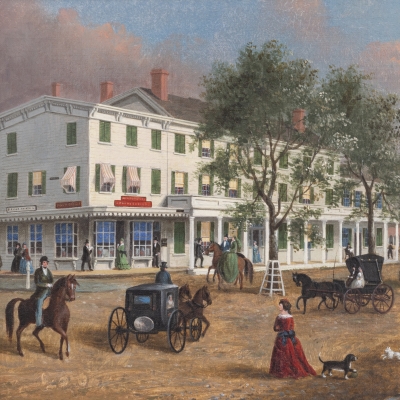