Born in Philadelphia, John Carlin was remarkable in his day as a deaf-mute painter and poet. He was one of sixteen original students at the Pennsylvania Institute for the Deaf and Dumb, from which he graduated in 1825. From 1833 to 1834, he studied portraiture and drawing in Philadelphia. In 1838 he traveled to London to study art.  He later went to Paris, studying with Paul Delaroche, before returning to the United States in 1841, where he lived in New York City and established himself as a miniaturist. With the advent of photography, the need for miniature portrait paintings became obsolete, and Carlin turned to painting the landscapes and genre scenes for which he is best known.

Carlin’s poem "The Deaf-Mute's Lament" was published in the Philadelphia Saturday Courier, and others appeared elsewhere, causing a stir because no one had ever heard of a deaf poet. The editor of the American Annals of the Deaf wrote, “we should almost as soon expect a man born blind to become a landscape painter, as one born deaf to produce poetry of even tolerable merit.” Carlin also wrote articles on architecture that appeared in The Saturday Evening Post magazine. In 1868 he published a children's book, The Scratchiest Family, with drawings of monkeys engraved by another deaf artist.

John Carlin was active in the deaf community and helped to raise over $6,000 for the St. Ann Church for the Deaf in New York. From 1873 to 1881 he chaired a fundraising committee to build the Gallaudet Home for Aged and Infirm Deaf, and he was influential in Edward Miner Gallaudet's decision to found Gallaudet University for the deaf. In 1864 Carlin spoke at the opening of Gallaudet University, and he later received the first honorary Master of the Arts degree proffered by the university.

Carlin became a member of the Artists’ Fund Society in 1859, where he frequently exhibited. He also exhibited extensively at the National Academy of Design. His work is represented in the collections of The Metropolitan Museum of Art, New York; Museum of Fine Arts, Boston; Clark University, Worcester, Massachusetts; Smithsonian American Art Museum and Gallaudet University, Washington, D. C.; Maryland Historical Society, Baltimore; Detroit Institute of Arts, and the Kentucky School for the Deaf, Danville. His brother Andrew Carlin was deaf and also worked as an artist. 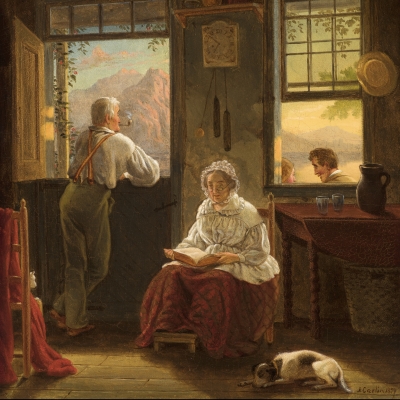