Joe Jones emerged as a talented modernist painter in St. Louis around 1930, and his brief training in decorative painting helped him to secure a mural commission in 1931. Radicalized by the Great Depression, Jones began to treat the country’s troubles in social realist paintings beginning in 1933, and in 1935 showed his work to acclaim at his first one-man show in New York.

Having found his voice, Jones embarked on a second phase of his career in 1936, when he received his first of several commissions from government agencies. The majority of these were from a Treasury Department program, which from 1937 to 1941 employed him to paint five murals for post offices in Kansas, Missouri, and Arkansas, mostly depicting wheat harvesting. He said of his 1939 mural in Anthony, Kansas: “My interest was in portraying man at work, his job before him and how he goes about it with his tools.... Man doing his work efficiently and under control is beautiful to look at to other men and that is my chief concern.” [1]

Jones covered World War II for the War Art Unit and Life magazine. Following the war, he shifted to landscape subjects, and produced lithographs and silkscreens as well. Jones settled in Morristown, New Jersey, in 1942. 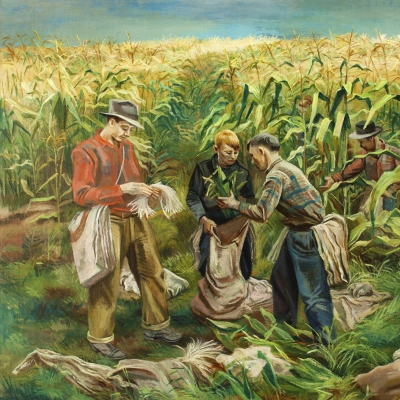