Jerome Thompson was born and raised in Middleborough, Massachusetts, but left his disapproving parents at the age of 17 to become an artist. In 1835 he moved to New York City, where he first worked as a portrait painter. In the late 1840s he began to paint genre scenes and landscapes based on his travels throughout New England, and he studied in England from 1852 to 1854. Following a trip to the Midwest in 1861, he painted frontier scenes and American Indian subjects. By the 1860s Thompson’s paintings were selling briskly and were widely distributed as chromolithographs. Late in life he retired to an estate in Glen Gardner, New Jersey, which he named “Mount Jerome.”

A turning point in Thompson’s career came in 1850. Having painted portraits since the early 1830s, sometimes traveling in order to seek out commissions, he now exhibited two genre scenes, The Rustic Chat and Children at a Brook (unlocated), at the American Art-Union, and two more, The Pick Nick and The Artist’s Studio (both unlocated), at the National Academy of Design. With at least three of the four sold by the end of the year, Thompson specialized in genre painting from this point forward. 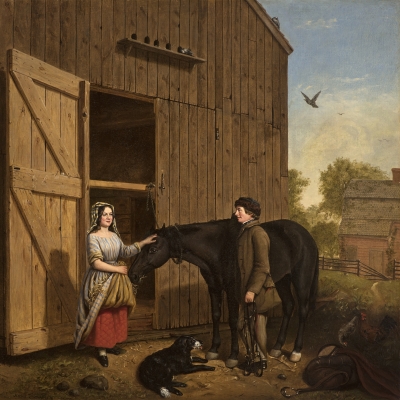