The Hudson River School painter and architect Jasper F. Cropsey began his artistic career auspiciously, as one of the youngest associate members ever elected to the National Academy of Design. Like his artistic role model, Thomas Cole, Cropsey succeeded as an artist because he was able to distill his careful observations of nature into dramatic ideal scenes.

Although already successful and well-regarded during the 1850s, Cropsey achieved fame for his large landscape Autumn—On the Hudson River, 1860 (National Gallery of Art, Washington, D. C.), which he exhibited while in London, along with a display of leaves to prove to the skeptical English that American fall foliage was indeed as bright as he had depicted it. The painting was a grand statement of Cropsey’s artistic vision probably intended to rival Frederic E. Church’s Heart of the Andes, 1857 (The Metropolitan Museum of Art, New York); its favorable reception by the public and critics such as John Ruskin ensured Cropsey’s continued success and led him to focus on the autumn landscape during the 1860s and 1870s.

Cropsey returned to the United States in 1863, and in 1869 he moved into Aladdin, a large Gothic Revival mansion and studio that he designed and built on a hill in Warwick, New York, overlooking Greenwood Lake. He based many of his paintings during this period on views of the lake, and also gathered material on sketching trips in New York State and the White Mountains. From the outset of his career, Cropsey excelled at the precise depiction of nature, but he was able to do so using a fluid technique that was distinct from the crisp strokes of Church or the hard Düsseldorf style of Albert Bierstadt.

Cropsey’s works can be found in the collections of The Metropolitan Museum of Art and New-York Historical Society, New York; Museum of Fine Arts, Boston; and the National Gallery of Art and Corcoran Gallery of Art, Washington, D. C. 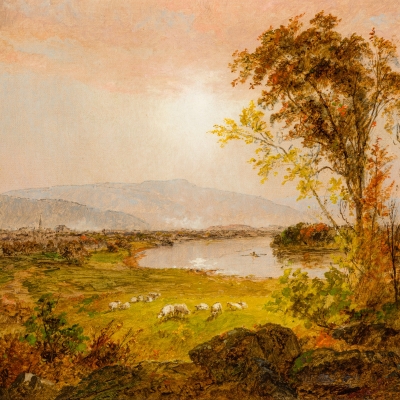