James Renwick Brevoort was born in Yonkers, New York, on July 20, 1832.  When he was eighteen he began to study architecture under his cousin, the acclaimed New York architect James Renwick, whose designs include St. Patrick’s Cathedral in New York City and the Smithsonian Institution in Washington, D.C. Concurrent with studying for his architecture degree at New York University, Brevoort attended classes at the National Academy of Design. He was awarded his degree in 1854, but by then his interests had turned toward art, and in 1856 he sent his first entry to the Academy, where he remained an active exhibitor for the rest of his life. He was elected an associate in 1861 and became a full member two years later. In addition to the National Academy, his work was shown at the Pennsylvania Academy of the Fine Arts, Brooklyn Art Association, Boston Athenaeum, Boston Art Club, and the Yonkers Art Association.

In 1873 Brevoort held a sale of his work in order to raise money for a trip to Europe. He spent seven years in Florence before returning to New York in 1880. In 1890 he resettled in Yonkers, and in 1916 became a founding member of the Yonkers Art Association. Brevoort died in Yonkers on December 15, 1918.

Before his European sojourn, Brevoort produced landscape and coastal marine paintings in the tradition of the Hudson River School. He spent his summers sketching in such locales as Salisbury, Connecticut, the Catskill Mountains, the Hudson River, and the coasts of Long Island and New England. 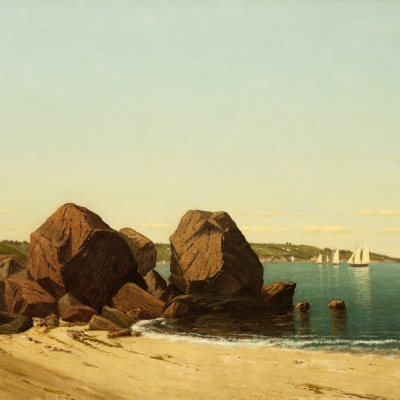