James Gale Tyler was born in Oswego, New York in 1855, and eventually settled on the coast of Connecticut in the town of Greenwich. Receiving his only formal art training from Archibald Carey Smith while in New York City in 1870, Tyler was basically self-taught. Drawn to the world of sailing, Tyler became one of the most notable maritime painters of his day. In addition to painting all types of boats—from old sloops to clipper ships—he painted a variety of seamen, coastal scenes, and seascapes. He was particularly interested in the America’s Cup Races, traveling to Newport, Rhode Island, every year between 1900 and 1930 to paint the annual race. These paintings were widely exhibited and critically acclaimed.

Although Tyler mainly concentrated on marine subjects, he also produced some portraits and cityscapes. Of all his artistic output, Tyler was highly recognized for his skill in portraying nocturne scenes. In addition, Tyler was a well-known illustrator; his work appeared in such periodicals as Harper’s, Century, and Literary Digest. He was a member of the Brooklyn Art Association, the Salmagundi Club and the Society of Independent Artists. 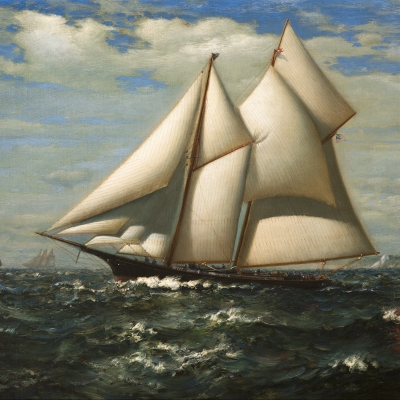