The son of landscape painter Lemuel Maynard Wiles, Irving Ramsey Wiles grew up in upstate New York, where his father worked as an art instructor. Eventually the Wiles family settled down in Silver Lake, New York, where his father established an art school. Irving assisted his father for a year before moving on to the Art Students League under the instruction of James Carroll Beckwith, Thomas Wilmer Dewing, and William Merritt Chase. Chase cut an impressive figure in the New York art world of the 1880s, and Wiles emulated him throughout his career, maintaining a lavish studio, succeeding him as an important teacher, and even setting up a plein air school on Long Island, just as Chase did. For his part, Chase thought Wiles to be one of the most talented students he ever had, and he encouraged Wiles to continue his studies abroad.  Wiles first studied at the Académie Julian in Paris before entering the atelier of Carolus-Duran. Carolus, who attracted young Americans because of the dazzling success of his former student John Singer Sargent, taught a method of painting directly from the model with minimum preparatory drawing, which was the antithesis of the labor-intensive style advocated by the École des Beaux-Arts. His system was to create the illusion of form not through line, but through the juxtaposition of colors or tones.[1] Wiles employed this technique for the rest of his life, becoming a master of the seemingly effortless bravura brushstroke.

After returning to New York in 1884, Wiles made a living as a teacher and illustrator. By the turn of the century he was receiving many commissions from prominent Americans, as his talents as a portrait and figure painter were becoming recognized.  The novelist Theodore Dreiser wrote of him in 1898:

As a painter Mr. Wiles is greatly to the fore just at present, and his pictures are justly admired for a style that is not so much pleasing for what it accurately puts in as for what it leaves out. His art has originality, in that the situations presented are new, the attitudes possessing both the grace of naturalness and, what is not quite the same, the naturalness of grace. You can appreciate his work more when you understand that he believes art should present only the beautiful.[2] 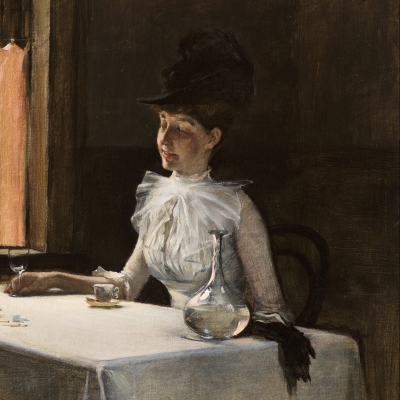