Harriet Randall Lumis was from Salem, Connecticut, a town not far from Old Lyme on the Connecticut coast, which in its day attracted a lively artistic community of American Tonalist and Impressionist painters.  Lumis moved to Springfield, Massachusetts, in 1892, where she studied drawing at the Evening Free Hand Drawing School, and painted with Willis Adams, a well-known and respected Tonalist.  Lumis’ first serious landscapes embodied the poetic mood and subjective approach of her mentor's style.  From 1910 to 1911, she studied in Cos Cob, Connecticut, and it was there that she met the artists John H. Twachtman and Childe Hassam, who introduced her to the color and technique of the French Impressionists.

Although the trend in American art was turning toward modernism, Lumis committed herself to working in the Impressionist style for her entire career.  She studied the works of Claude Monet, and her paintings took on the high-keyed palette and broken brushwork of the French master.  Lumis refined her Impressionist style of painting in Gloucester, Massachusets, during the 1920s under the instruction of Hugh Breckenridge at his summer art school.  There she began painting in plein air, and she returned to the area summer after summer to paint.  The decade of the 1920s was extraordinarily successful for Lumis; she was elected to the National Association of Women Painters and Sculptors, and her paintings won numerous prizes and awards.

Toward the end of her career, Lumis taught landscape painting while continuing to paint her own vivid impressions of the various arms of Gloucester and Rockport harbors.  These views gained much recognition, becoming her most famous works, and were included in many exhibitions, including shows at the prestigious National Academy of Design, the Pennsylvania Academy of the Fine Arts, Buffalo Society of Artists, Connecticut Academy of the Fine Arts, and the Providence Society of Artists.  From 1938 until her death in 1953, Lumis taught new generations of students in her Springfield studio.  In 1949, Lumis was a founding member of the American Artists Association, which supported artists who painted in a traditional and realistic style.  Harriet Randall Lumis was a spirited and dedicated artist whose work is highly regarded by private collectors and scholars alike.  Works by Lumis are in the collections of the Butler Institute of American Art, Youngstown, Ohio, Florence Griswold Museum, Old Lyme, Connecticut; Mattatuck Museum, Waterbury, Connecticut; and the George Walter Vincent Smith Museum, Springfield, Massachusetts. 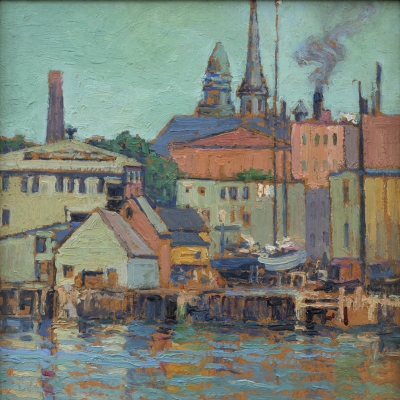