The son of a senator, Guy Rose was born in San Gabriel, California. He studied at the San Francisco Art School with Emil Carlsen and Virgil Williams in 1885. Subsequently, Rose traveled to Paris, where he continued his studies at the Académie Julian with Jean-Paul Laurens, Jules-Joseph Lefebvre, and Benjamin Constant from 1888 to 1889, and then made an extensive tour of Europe and North Africa.

Encouraged by Theodore Robinson, Rose first visited Giverny, France, around 1890. At this time, American artists flocked to this village in Normandy, which Claude Monet had made his home. Rose returned to the United States in 1891 and settled in New York, teaching at the Pratt Institute of Art and illustrating for Harper’s, Scribner’s, and Century magazines. In 1894 his work for Harper’s took him to Venice, where he met the art student Ethel Boardman, whom he married early the next year.

Rose returned to Giverny in 1899, and in 1904 he and his wife purchased a cottage there and remained for the next eight years. Rose was a principal figure among the third-generation colonists and befriended fellow artists Theodore Earl Butler, Frederick Frieseke, Edmund Greacen, Lawton Parker, Lila Cabot Perry, Louis Ritman, and Richard Miller. 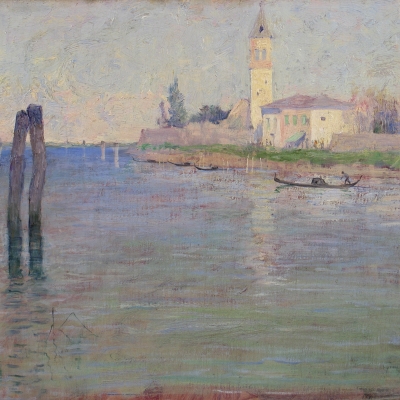