The spokesman for the Regionalist movement in American painting, Grant Wood came from a mixture of Victorian and rural beginnings. He was born near Anamosa, Iowa, twenty-five miles north of Cedar Rapids, and spent the first ten years of his life on the family farm. After his father died the family moved to the prosperous city of Cedar Rapids, where young Wood developed his artistic talents. Although he enrolled in some formal art classes locally and later abroad in Paris, he was mainly self-taught, mastering carpentry, metalworking, stained glass and sculptural techniques in addition to drawing and painting. Grant could paint in a number of styles from neo-classical to modernist, and used that range to his advantage in the early 1920s. His work mirrored the eclecticism of late nineteenth-century academic students like John La Farge and John Singer Sargent in its array of styles, always relative to the task at hand. [1] One of Wood's biggest influences during the late 1920s was the work of fifteenth-century Flemish painter Hans Memling (c. 1433–94). In 1928 Wood traveled to Germany to oversee a commission, and it was there in Munich's Alte Pinakothek that he first saw and studied the work of Memling. Wood appreciated the subject matter and the realism of the Northern School painters, and he admired their sophisticated use of decorative and design elements. This experience had a great effect on Wood's new work to come.

During the early 1930s, Wood narrowed his subject matter to portraits. In 1930, the painting that turned him into a nationally-known artist, American Gothic, was first exhibited in Chicago.  Almost overnight his notorierty changed from local to national celebrity as the creator of arguably the most recognizable image in American art. The paintings that followed solidified his position as an important American artist and he went on to paint some of his best and most famous works through the decade of the 1930s. 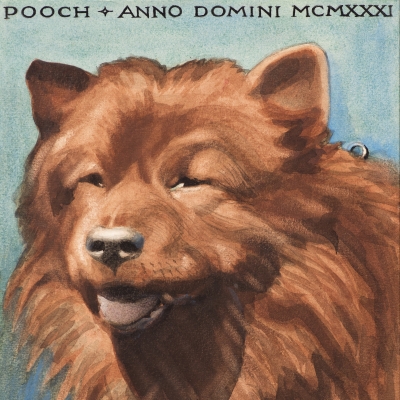