George Henry Durrie created some of the most popular and enduring images of mid-nineteenth century American rural life. While he painted all of the seasons, he is best known for his winter scenes, which combine views of New England farmhouses with genre elements such as oxen, horses, logging carts, and sleighs. In 1861 and 1867, Currier & Ives popularized his paintings by doing a series of ten lithographs. The disruption of the Civil War and the increased urbanization and industrialization of the late 1860s gave new meaning to these scenes of homey comforts and family gatherings.

Durrie was born in New Haven, Connecticut, in 1820. He studied with the local portraitist Nathaniel Jocelyn, and from 1836 to 1841 he worked as an itinerant portrait painter in Connecticut, New Jersey, New York and Virginia. After he married Sarah A. Perkins of Bethany, Connecticut, in 1841, he returned to New Haven, where he remained for the rest of his life, except for 1857, which he spent in New York City. He sold his works from his studio in New Haven and exhibited at the National Academy of Design, Pennsylvania Academy of the Fine Arts, Boston Athenaeum, and the American Art-Union.

Before Durrie, only Thomas Doughty and Thomas Birch had shown a serious interest in painting winter landscapes. Most nineteenth-century artists preferred to work in the comfort of their warm studios during the cold months, and winter, which represented death and decay, was not considered suitable subject matter for the uplifting didactic role of landscape painting.  George Durrie had a deep appreciation for the beauty of the American winter landscape, and his idealized views of neat, cozy New England farms have a timeless quality.

Durrie’s untimely death at age forty-three is one of the reasons why his paintings are relatively rare and thus are coveted by collectors. His work can be found in many major museums, including The Metropolitan Museum of Art, New York; Museum of Fine Arts, Boston; and the Wadsworth Atheneum, Hartford, Connecticut. 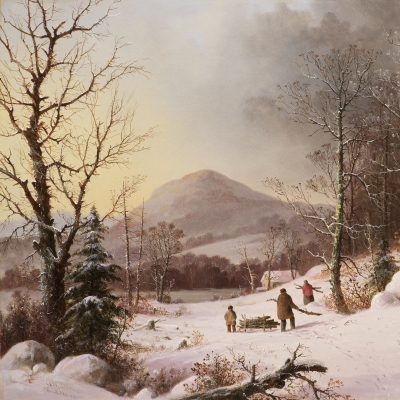