George Curtis came of age in the rich artistic environment of 1830s Boston. Washington Allston, Thomas Doughty, and Alvan Fisher were among the distinguished painters whom he would have admired, as well as the marine specialist Robert Salmon, who left in 1842. As Curtis began to exhibit and sell his work in the 1840s and 1850s, while employed as a painter of stage sets, Fitz Henry Lane was the artist whose example he followed. He appears to have made the transition to a full-time career as a fine artist in the 1860s, when he exhibited widely and was referred to in the same breath as the city’s leading artists.

Curtis’ later work, from about 1870 until his death, contains more than the accurate appearance of ships pleasingly rendered—it has a visionary quality. The artist came to prefer smaller sizes, 12 x 20 inches or less, and cultivated an intimate atmosphere pregnant with mood. Like the English artist J. M. W. Turner in his late period, Curtis edged toward abstraction and used light expressively. While his light effects were often derived from Lane, Curtis generally favored brighter, more saturated conditions to the serene gradations of Lane and other luminists.

George Curtis was born in Wayland, Massachusetts, to one of New England’s oldest families. He traveled in the Midwest in the late 1830s and to Europe during the 1840s. Curtis settled in Boston, supporting himself as a painter of stage sets for the old Boston Museum and Gallery of Fine Arts from 1843 to 1860, while building his reputation as a fine artist. 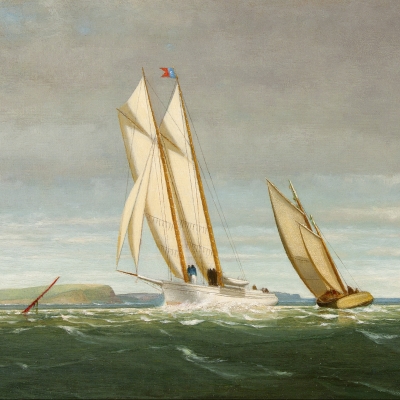