George Cochran Lambdin was born in Pittsburgh, Pennsylvania, the son of academic figure painter James Reid Lambdin. The family moved to Philadelphia in 1837 and Lambdin began his training under his father. In about 1855 he went abroad to study at several European art academies, including those in Munich, Paris, and Rome. Lambdin began his career as a painter of genre and Civil War scenes. He painted floral still lifes as early as 1857, but his concentration on the theme began around 1867 when he took up residence at the Tenth Street Studio Building in New York City and became friendly with flower painter John La Farge. The following year, Lambdin produced several paintings of young girls in outdoor garden scenes, which were widely distributed as chromolithographs. The success of that venture, combined with Lambdin’s return to the Philadelphia area in 1870, may have prompted his decision to concentrate on flower still lifes for the remainder of his career.

The first American to specialize in painting roses, Lambdin lived in Germantown, Pennsylvania, a suburban section of Philadelphia known for its commercial nurseries. At his home on Price Street the artist maintained a conservatory and a celebrated rose garden that also provided the subjects for most of his floral still lifes. He painted a variety of flowers, yet his preference was for the rose, and his works of this subject became extremely popular. In general, Lambdin painted two types of flower still lifes—tabletop arrangements of abundant bouquets of roses, irises, fuchsias, and peonies in vases, or a living rose vine set against a dark monochromatic background or austere outdoor setting.

American still-life expert William H. Gerdts noted that Lambdin pioneered the painting of flowers against a black background “in which the naturalness of the growing flowers themselves is at striking variance with the total abstraction of their setting.” Lambdin originated this type of floral still life in the 1870s and influenced many other generations of flower painters to emulate him.

Lambdin showed regularly at the National Academy of Design, Pennsylvania Academy of the Fine Arts, Brooklyn Art Association, and the Boston Art Club. His work was shown at the Universal Exposition in Paris in 1867. Lambdin was elected a National Academician in 1868 and in 1872 he helped found the Germantown Horticultural Society. His works are housed in important public collections, including The Metropolitan Museum of Art, New York; National Gallery of Art, Washington, D. C.; Museum of Fine Arts, Boston; Denver Art Museum, Colorado; Yale University Art Gallery, New Haven, Connecticut; and the Philadelphia Museum of Art. 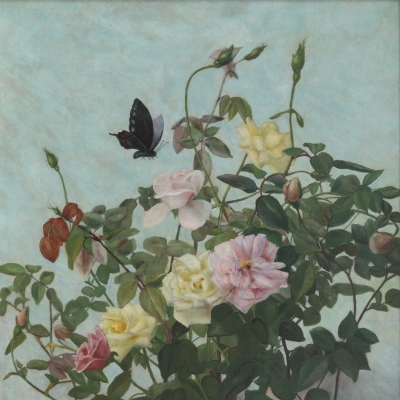 George Cochran Lambdin (1830–1896)
Roses with Butterfly
Back To Top