Frank W. Benson’s paintings of women and children in sunlit meadows helped to establish Impressionism as a major style of painting in America.  Benson is also known for his indoor figurative works, which convey the quiet, contemplative spirit of the genteel age, and for paintings, etchings, and watercolors of sporting subjects, especially of fishing and hunting. Benson’s fame and financial success lasted throughout his career.  He was one of the most popular artists of his era, and today his paintings are widely reproduced and considered among the most beautiful works in American art.

Born in Salem, Massachusetts, Frank Benson began his formal art training in 1880 at the School of the Museum of Fine Arts, Boston. In 1883 he went to Paris to continue his studies at the Académie Julian.  When he returned home in 1885, he settled in Salem and painted portraits to support himself.   In 1889 Benson began to teach at Boston’s Museum of Fine Arts School. Together with his lifelong friend Edmund Tarbell, he helped to establish the institution as one of the outstanding art schools in the United States.  During the 1890s Benson maintained a busy routine of teaching and painting in his studio and exhibited his work at nationally recognized institutions such as the National Academy of Design and the Society of American Artists.  His work also made the rounds of the annuals held on the East Coast and in the Midwest. His entries regularly won prizes and medals and their frequent sale afforded Benson a comfortable living.

In 1898 Benson and a group of painters from New York and Boston that included Edmund Tarbell, Robert Reid, Edward Simmons, Thomas Dewing, Childe Hassam, J. Alden Weir, Willard Metcalf, and John Twachtman broke away from the Society of American Artists to form The Ten American Painters.  The group exhibited together for the next twenty years. Benson’s shift toward Impressionist subject matter and style coincides with his involvement with The Ten, but more significant in his development as an Impressionist were the summer days he spent in the country with his family, first in New Castle, New Hampshire, and, after 1901, at Wooster Farm, his summer retreat on North Haven Island in Maine’s Penobscot Bay.  Inspired by the region’s brilliant light and open coastal landscape, Benson painted some of his most memorable works on the island.

In about 1920 Benson began to experiment with watercolor, a medium he had considered too weak and delicate in the past.  As he told an interviewer in 1935, “I had always looked upon watercolors rather indifferently, most of the ones I had seen had been soft and pretty.  But, I came to realize that the medium was one which could be exceeding strong and expressive.”[1] Always an avid sportsman, Benson had become frustrated by the difficulty he had painting in oils during his frequent hunting and fishing trips.  The portability of watercolors suited him perfectly, and he enjoyed the spontaneity that the medium afforded him.  Eventually Benson was recognized as a master of the medium, and his work was often compared to that of Winslow Homer and John Singer Sargent.  His watercolors were in such high demand that he had difficulty keeping up with the requests for his work from his dealers. 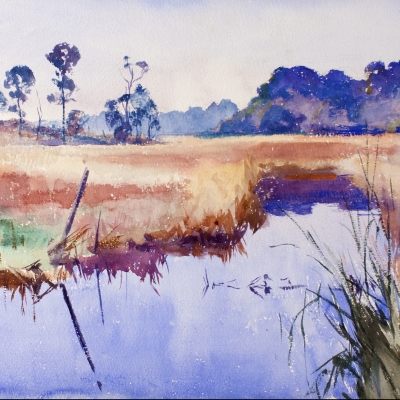