When he was three years old, Francis Criss’s family emigrated from England to America, settling in Philadelphia. In 1917 the artist enrolled at the Pennsylvania Academy of the Fine Arts, where, in 1921, he was awarded a scholarship that allowed him to travel through Europe. When Criss eventually settled in New York in 1926, he began instruction at the Art Students League under Jan Matulka. After completing his studies in 1931, Criss began to exhibit his work and soon met with critical acclaim when his Astor Place, 1932, appeared in the Whitney Museum of American Art’s First Biennial Exhibition of Contemporary American Painting. The following year, the artist had a one-man exhibition of paintings at Mellon Galleries in his hometown of Philadelphia. He was awarded a Guggenheim Memorial Foundation fellowship in 1934 after submitting an application that was accompanied by a letter of recommendation from fellow artist Charles Sheeler and positive remarks from a number of critics.

From 1935 to 1939 Criss worked as a muralist for the New York City office of the Federal Art Project, part of the Works Progress Administration, to design mural paintings for the pioneering Williamsburg Housing Project in Brooklyn.

Criss was unidentified in academic circles as belonging to either the group of precisionist and realist painters of the 1930s or the abstract American painters. The artist may have had some resistance to this categorization of his style, at a time when the art world seemed to demand it. This may explain his exclusion by curators from the Whitney Museum’s 1935 show Abstract Painting in America and the Museum of Modern Art’s groundbreaking show of 1943, American Realists and Magic Realists. Art historian Gail Stavitsky described the artist’s work of this period as belonging to the “semi-abstractionist, semi-unclassifiables.”[1] 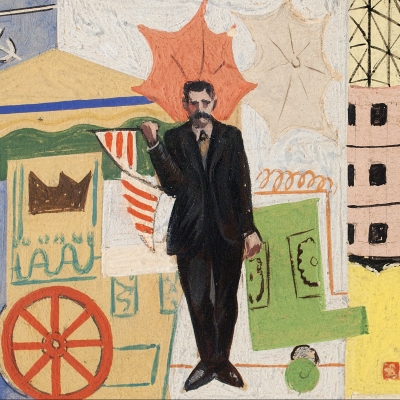