A leading marine painter of the second half of the nineteenth century, Francis A. Silva was born in New York City on October 4, 1835. He began his artistic career as an ornamental sign painter, and by 1859 was listed in the city directory as a professional painter.  Concurrent with his artistic pursuits, the patriotic Silva enlisted in the army in the mid-1850s, serving first with the famed Seventh Regiment of the New York State Militia (which was also Sanford R. Gifford’s regiment). He then joined the brave and flamboyant Zouaves of the Seventh New York Volunteer Infantry as a first lieutenant. At the outbreak of the Civil War in 1861, he was promoted to captain in the First New York Volunteer Infantry and was with McClellan during the siege of Richmond. A bout of malaria sent Silva home to New York in May 1862. Shortly afterward, he was wrongly accused of desertion but was reinstated by the end of the year. Despite his vigorous efforts to obtain another military commission, he did not see active duty again until 1865, when he served for a brief period as a hospital steward in Lynn, Massachusetts. This marked a turning point in Silva’s career as an artist, for it introduced him for the first time to the beauty of the New England coastline. Silva maintained a “tinge of the military” throughout his life, and his deep convictions about the war and its aftermath were often reflected in his paintings.[1]

Silva established a New York studio in 1867. He became a regular exhibitor at the National Academy of Design, Brooklyn Art Association, and the American Watercolor Society. He soon became known for his luminist paintings of the New England coast, the Hudson River, New York harbor, and the beaches of Long Island and New Jersey. An avid watercolorist and influential proponent of the medium, Silva became a member of the American Watercolor Society in 1872. He moved to Long Branch, New Jersey, in 1880, but maintained his ties to New York through his tenancy in the famous Tenth Street Studio Building until his untimely death from pneumonia in 1886. 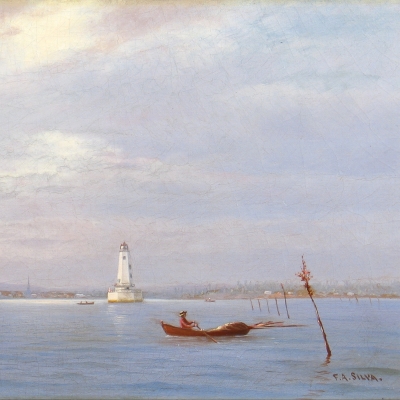