Fletcher Martin was born in Palisade, Colorado, and later grew up in Idaho and Washington State. He took an early interest in drawing, but had little exposure to fine art. After living the life of a drifter, he joined the Navy from 1922 to 1926, where he served as a signalman and fought as a light-heavyweight boxer. He re-discovered his interest in art while working for a printer in Los Angeles in the late 1920s, and after assisting the Mexican muralist David Alfaro Siqueiros, he made his reputation in Southern California art circles as a social realist painter in the 1930s. He painted murals for the Works Progress Administration and the Treasury Section from 1936 to 1945, and began to teach in 1938, replacing Thomas Hart Benton at the Kansas City Art Institute in 1941. He moved to New York City in 1945, and later settled in Woodstock.

In his early career, Martin drew inspiration from the vigor, grit, and masculinity of the Ashcan school, and particularly from the work of George Bellows, whose boxing subjects resonated with Martin’s experience as a boxer and his enthusiasm for the sport. The Museum of Modern Art’s acquisition of Martin’s dramatic fight scene Trouble in Frisco, 1938, reinforced this direction in his art, and he continued to paint boxing and fight subjects through the 1940s.

(This entry was written by Bruce Weber.) 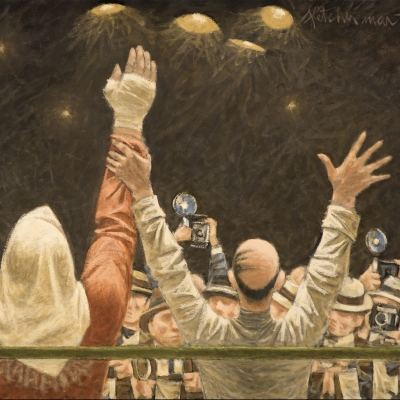