Landscape painter Ernest Parton was born in Hudson, New York.  His brothers Arthur and Henry were also landscape specialists.  Ernest Parton came of age as an artist at a time when a great shift was taking place in American art, and his works are a perfect example of the bridge between the Hudson River School style and early American Impressionism.  As a young man, Parton studied art in England and exhibited at the Royal Academy in London.  He lived with his wife in St. John’s Wood in northern London until 1932, occasionally returning to the United States. Parton formed close relationships with fellow artists Theodore Robinson, John Singer Sargent, and Daniel Ridgeway Knight. Parton’s painting style is closely aligned with the Barbizon and tonalist styles.

Parton showed his work in the Paris Expositions of 1889 and 1900, the Paris Salons of 1892 and 1894, the Pennsylvania Academy of the Fine Arts, and at the National Academy of Design between 1866 and 1897. Parton's works are held in numerous private collections and public institutions in the United States and in Europe, including the Victoria & Albert Museum and Tate Gallery, London; Walker Art Center, Minneapolis; Reading Pubic Museum, Pennsylvania; and the University of Southern California, Los Angeles. 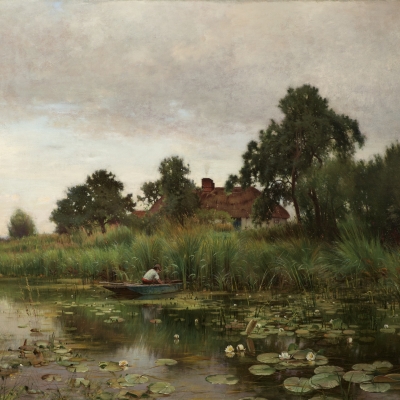