Born in Charleston, South Carolina, Edward Lamson Henry was orphaned as a child and brought to New York City. He studied there with Walter M. Oddie and later at the Pennsylvania Academy of the Fine Arts. From 1860 to 1862 he traveled abroad and studied in Paris with Charles Gleyre and Gustave Courbet.

Henry was an indefatigable collector of all things antique, from Colonial furniture to antebellum carriages, and he used many of these objects in his paintings of historical events and bygone ways of life. His fascination with the past is understandable, for his adult life spanned the entirety of the Gilded Age, a period of tremendous changes between the Civil War and World War I.

In 1884 Henry built a house in rural Ulster County, New York, where the Cragsmoor artists’ colony would soon spring up. Nestled in the Shawangunk Mountains, the area sheltered the traditional lifestyles and old-fashioned customs that Henry cherished. Many of his paintings include local models and nearby houses, as well as carriages from Henry’s extensive collection. 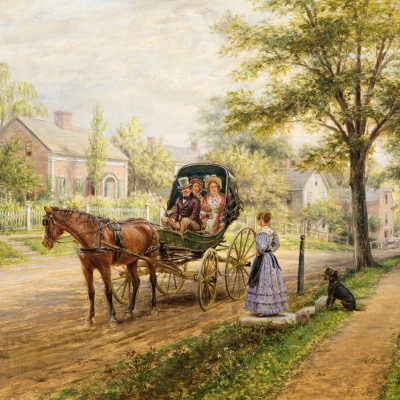