Buffalo native Edward Dufner began his creative career in the architectural firm of Charles Sumner. He took classes at the Buffalo Art Students League with George Bridgman, supporting himself through portrait painting and illustration. After winning the league’s Albright Award in 1893, he moved to New York and continued his studies at the Art Students League there with H. Siddons Mowbray. He continued to work as an illustrator until he married Annie L. Collins in 1898 and moved to Paris.

In Paris Dufner enrolled at the Académie Julian and exhibited at the Salon in 1899 and 1900. He also worked at the Académie Carmen, where James McNeill Whistler sometimes advised students.  Dufner emulated Whistler’s art during these years, painting plein-air landscapes and elegant portraits. He returned to Buffalo in 1903 to teach at the Art Students League, and he taught at the Art Students League of New York beginning in 1907. Dufner began to summer in New Jersey in 1910, where, under the influence of Willard Leroy Metcalf’s work, he developed the colorful Impressionist style for which he is most remembered today.

Dufner exhibited extensively throughout the country, and he was a National Academician and a member of the American Water Color Society, New York Water Color Club, Lotos Club, National Arts Club, Allied Artists of America, and the Buffalo Society of Artists. His work can be found in private collections and leading institutions, such as the National Academy of Design and Brooklyn Museum, New York; Albright-Knox Art Gallery, New York; Newark Museum, Montclair Art Museum, New Jersey; and the National Gallery of Art, Washington, D. C. 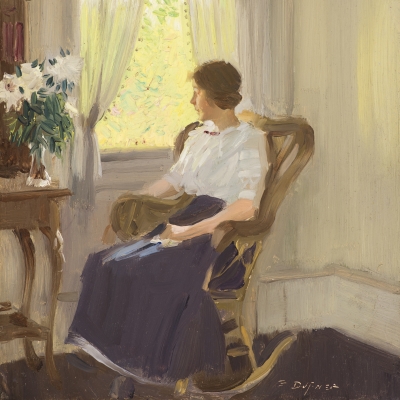