Born in New York City, Edmund Greacen grew up in a brownstone on the site where Rockefeller Center now stands. After graduating from New York University, Greacen studied at the Art Students League in 1899 and at the New York School of Art with William Merritt Chase, Robert Henri, Everett Shinn, F. Luis Mora, and Frank DuMond. In 1904 Greacen married Ethol Booth, and the newlyweds sailed to Europe with Chase the next spring. Greacen remained in Europe, living at the art colony in Giverny, where he absorbed the influence of Claude Monet. Greacen tempered the exuberance of Impressionist painting to suit the intimate mood of his art, choosing more muted colors and a less gestural technique for his landscapes and figure paintings.

After his return to the United States, Greacen began to frequent the art colony at Old Lyme, which became a kind of American Giverny. Lodging at the Griswold House with Childe Hassam, Willard Metcalf, and many other Impressionist painters, Greacen painted the local scenery and continued a series of paintings of his wife that he had begun in France.

In addition to landscape and figure paintings, Greacen also painted city views, and he exhibited with Ashcan artists George Bellows, John Sloan, George Luks, and Stuart Davis in 1910. In 1923 Greacen established the influential artists’ cooperative that became Grand Central Art Galleries, and the following year he founded the Grand Central School of Art, where he taught for 20 years.

Greacen exhibited at the Pennsylvania Academy of the Fine Arts, Corcoran Gallery biennials, Macbeth Gallery, New York, and many other venues. He was a member of the National Academy of Design, Salmagundi Club, Lotos Club, and the National Arts Club. His work can be found in the collections of the Newark Museum, New Jersey; Florence Griswold Museum, Old Lyme, and Lyman Allyn Museum, New London, Connecticut; Butler Institute of American Art, Youngstown, Ohio; and the Cummer Museum of Art, Jacksonville, Florida. 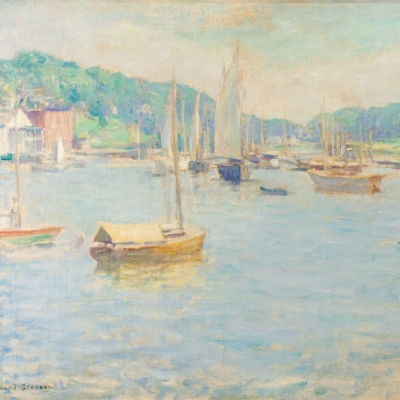