Earl Horter is notable both as an artist and as a collector. Born in Germantown, Pennsylvania, in 1880, Horter never received academic training, but he made his living as an illustrator for the advertising firms Calkins & Holden from 1903 to 1916 and N. W. Ayer from 1917 to 1923. He later taught at numerous art schools in the Philadelphia area. His own work consists of both realist etchings and aquatints, for which he became well known, and modernist paintings and drawings influenced by the art in his collection. In the 1920s Horter seized the opportunity to collect work by important modernists, such as Pablo Picasso, Georges Braque, Constantin Brancusi, and Marcel Duchamp, who were out of favor with American museums and collectors. His taste for the best and most challenging examples of modernist art is particularly remarkable: his collection included such masterpieces as Picasso’s Portrait of Daniel Henry Kahnweiler (now at the Art Institute of Chicago) and Duchamp’s controversial Nude Descending a Staircase, No. 1 (now at the Philadelphia Museum of Art).

Horter exhibited at a one-man show at Frederick Keppel & Co., New York, Salons of America in 1923, Pennsylvania Academy of the Fine Arts from 1924 to 1940, Whitney Museum of American Art from 1926 to 1940, and at the Corcoran Gallery biennials from 1935 to 1939. He won awards at the Pan-Pacific Exposition, 1915, the Etching Show at the Art Institute of Chicago in 1932, and at the National Exhibition of Prints at the Philadelphia Print Club in 1933 and 1938. His work is housed in major public collections such as the Whitney Museum of American Art, New York; Worcester Art Museum, Massachusetts; Philadelphia Museum of Art, Pennsylvania Academy of the Fine Arts, Philadelphia; Carnegie Museum of Art, Pittsburgh; Smithsonian American Art Museum, Washington, D. C.; Saint Louis Art Museum, and the Nelson-Atkins Museum of Art, Kansas City. 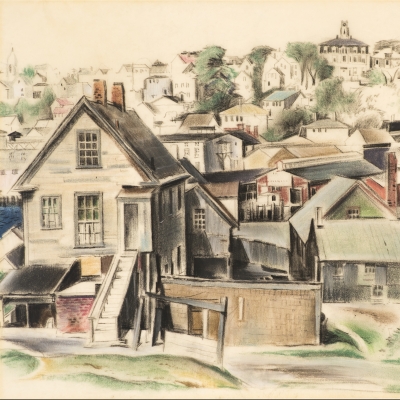