Dwight William Tryon was born in Hartford, Connecticut. Initially a self-taught artist, Tryon’s early work was influenced by the Hudson River School painters, whose work he saw at the Wadsworth Athenaeum in Hartford. Tryon married Alice H. Belden in 1873, and that year two of his paintings were accepted for the annual exhibition at the National Academy of Design. Thus began Tryon’s long and successful career as a painter of refined and poetic landscapes.

By the mid-1870s Tryon’s work had begun to take on the characteristics of Tonalism, a stylistic movement that depicted the landscape in a muted palette and with a soft, painterly technique. He went to Paris in 1876 in search of the academic training he had never received at home, and found inspiration in the work of the Barbizon painters Charles-François Daubigny and Jean-Baptiste-Camille Corot.  For the next four years, Tryon traveled extensively, visiting such picturesque places as Normandy, Brittany, London, Venice, and Dordrecht. He returned to the United States in 1881 and established a teaching studio in New York City.

In 1887 the Tryons settled in South Dartmouth, Massachusetts, near New Bedford.  The combination of land and sea provided an inspirational setting for Tryon to explore his craft, and he continued to paint this environment for the rest of his career. Much of his painting in these years was also influenced by the Oriental compositions and muted colors made popular by James Abbott McNeill Whistler.

Perhaps the most significant event in Tryon’s career came in 1889, when he met Charles Lang Freer, an avid collector of American and Oriental art. Over the years, Freer acquired many of Tryon’s paintings, believing that they, along with the works he collected by Whistler, Thomas Wilmer Dewing, and Abbott Henderson Thayer, were in keeping with his collection of Oriental art. Freer was an ideal patron; he enthusiastically acquired and exhibited Tryon’s work in order to promote the artist’s career.  Freer’s Tryon collection is now housed in the Freer Gallery, Washington, D. C. 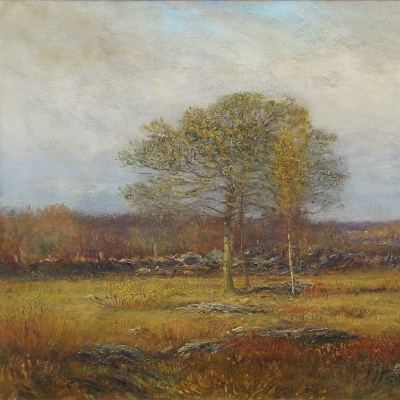