Clarence Kerr Chatterton was born in Newburgh, New York, in 1880. Beginning in 1900, he attended the New York School of Art, where he studied under William Merritt Chase, Kenneth Hayes Miller, Robert Henri, and Francis Luis Mora. Like his fellow students George Bellows, Edward Hopper, and Guy Pène du Bois, Chatterton began his career as a second-generation Ashcan artist. Under the influence of Henri, he treated urban subjects like dock workers and exhibited with other Henri students at the McDowell Club in 1910.

When Chatterton became artist-in-residence at Vassar College in 1915, he retained his straightforward style and commonplace subject matter, but shifted his focus from New York City to rural New England. He and his lifelong friend Edward Hopper worked closely together, developing an appreciation for the simple architecture of small-town America. Their styles remained similar through the 1940s, and Chatterton was considered to be a leading realist along with Hopper, Charles Burchfield, and Rockwell Kent. Chatterton taught at Vassar until 1948, regularly summering on the New England coast. 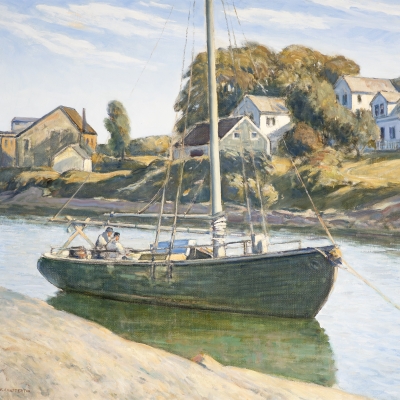