Charles Burchfield grew up in Salem, Ohio, and remained associated with this region for his entire life. As a child, Burchfield was intensely sensitive to nature, and he spent many hours walking in the woods and fields near his home, sketching and reading the works of such naturalists as Henry David Thoreau and John Burroughs. After graduating from high school, he attended the Cleveland School of Art (1912–16), where he excelled in courses in design and decorative illustration. Through his teachers William Eastman and Henry G. Keller, he was introduced to Oriental art and developed an interest in the bold, patterned shapes of Japanese prints and the decorative and rhythmic abstractions of Chinese scroll paintings.

In October of 1916 Burchfield went to New York on a scholarship to study at the National Academy of Design. He attended only one day of class, quickly realizing that New York was not for him. He was back in Salem by the end of November, but while in New York he developed a friendship with Mary Mowbray-Clarke, who became his dealer for the next thirteen years and helped to promote him as a rising star in American art. In the fall of 1921 Burchfield moved to Buffalo, New York, where he supported himself by working as a designer in a wallpaper company. In 1929, when Frank K. M. Rehn became his dealer, he was able to devote all of his time to painting.

In 1956, Burchfield’s biographer, John I. H. Baur, identified three distinct periods in Burchfield’s career. During the first, from 1916 to about 1920, the artist painted small-scale works in which he recorded his emotional responses to the forces of nature using a unique system of graphic symbols to express his feelings about rain and snowstorms, sounds, and feelings. The second phase began in 1921, when Burchfield left his hometown of Salem and moved to Buffalo. The change of scenery shifted his focus from the rural landscape to the urban and industrialized scenery around Buffalo. His large, realistically painted images of abandoned or dilapidated houses, lonely, isolated streets, smoke-belching factories, and steam locomotives captured the moody spirit of Depression-era America. In 1943, Burchfield returned to nature for his inspiration and combined aspects of the two earlier phases of his career. He applied the calligraphic language from his early years to large, exuberant landscapes that celebrate both the seasons and the mysteries of the natural world.

Charles Burchfield is one of the most celebrated and original modern American artists.  His work is included in all major public art collections in the country. For many years he was considered an isolated figure, in part because he chose to work away from the New York art scene. But recent scholarship has demonstrated Burchfield’s wide-ranging influence on his contemporaries, as well as his firm place in the story of twentieth-century American art. 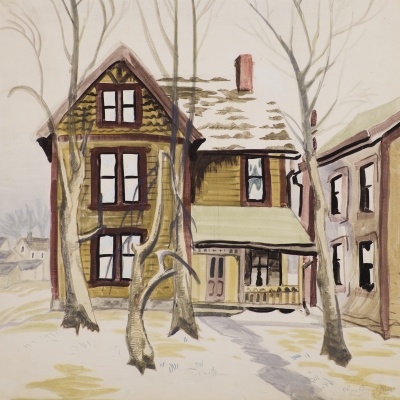