Born into a well-to-do family in Lancaster, Pennsylvania, Charles Demuth displayed precocious artistic talent at an early age. He studied at the Drexel Institute of Art, Science, and Industry from 1903 to 1905, and with Thomas Anshutz at the Pennsylvania Academy of the Fine Arts from 1905 to 1910. Demuth’s early work contains elements of the Ashcan style then being practiced by the previous generation of Anshutz students, such as Robert Henri and John Sloan, as well as elements of the fin-du-siècle Aestheticism of the English illustrator Aubrey Beardsley.

Demuth visited Paris from 1907 to 1908 and again from 1912 to 1914, when he met his mentor Marsden Hartley and frequented the salon of Leo and Gertrude Stein. In 1914 he moved to New York, where he became part of a circle of avant-garde artists and writers, including Marcel Duchamp and Eugene O’Neill. Beginning around 1917, Demuth pioneered the Precisionist style, under the influence of Cubism. He supplemented his focus on industrial architecture during the 1920s with watercolors of fruit, vegetables, and flowers, subjects that allowed him to indulge his delight in organic forms. 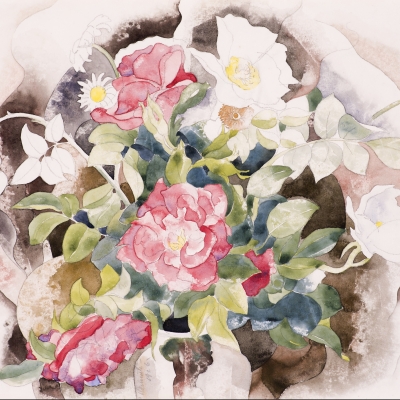