Born in Hartford, Kentucky, Charles Courtney Curran studied briefly at the Cincinnati School of Design in 1881. After moving to New York City the following year, Curran enrolled at the National Academy of Design and continued his training at the Art Students League. He received early recognition, first exhibiting at the National Academy in 1883. This marked the beginning of a lifelong association with the Academy, where Curran proceeded to exhibit in an impressive sixty-one consecutive annual exhibitions, as well as nearly every winter exhibition from 1906 to 1932.

From 1888 to 1890, Curran studied at the Académie Julian in Paris. His exposure to French Impressionism there is evident in the brighter palette and dappled light effect of our 1894 painting An Afternoon Respite. This small jewel depicts a young woman who, after picking the orange flowers that rest in her lap, has reclined on a shady hill overlooking the ocean. Depicted in profile, she gazes out toward a small sailboat in the middle ground and a sailing ship in the distance. Her relaxed posture and expression and the harmonious palette of blues, greens, and lavender both contribute to a mood of leisure and contentment.

Upon his return to America, Curran divided his time between New York City and his house and studio near Cragsmoor, New York, where he was a leader of the Cragsmoor Art Colony. Founded by Edward Lamson Henry in 1883, the Cragsmoor Colony became a favorite retreat for landscape painters, who were attracted to its clear views of the surrounding mountains and valleys. Curran first stayed there as a guest of artist and writer Frederick Dellenbaugh in 1903, and eventually built his summer home there in 1910.  As art historian William H. Gerdts wrote, “Cragsmoor enjoyed a new influx of ‘permanent visitors’ in the early years of this century.  Charles Courtney Curran was undoubtedly the most renowned of this second generation.”[1] Curran remained associated with Cragsmoor into the late 1930s.

Curran exhibited his paintings at the National Academy of Design, where he was elected an academician in 1904. He also exhibited at the Pennsylvania Academy of the Fine Arts, Brooklyn Art Association, Art Institute of Chicago, and the Boston Art Club, in addition to numerous international expositions. His work is housed in important public collections, including The Metropolitan Museum of Art, New York; National Gallery of Art, Washington, D. C.; and the Pennsylvania Academy of the Fine Arts, Philadelphia. 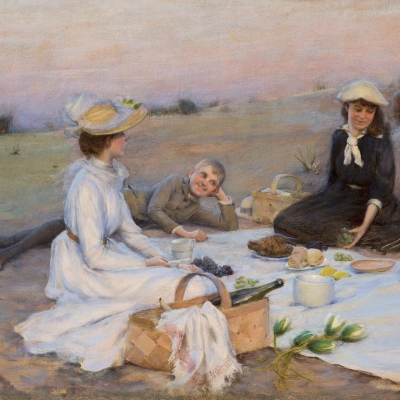 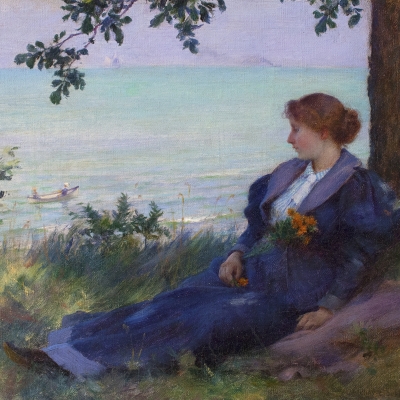