Born in Saint John, New Brunswick, Canada, Charles Caleb Ward was a painter, photographer, illustrator and printmaker.  His grandfather, Major John Ward, settled in New Brunswick after leaving Poughkeepsie at the end of the Revolutionary War in 1783 and established himself as a merchant.  Ward traveled to Liverpool to learn the family business and there began to study figure painting with William Henry Hunt, a Pre-Raphaelite artist known for his watercolors, still -life and genre scenes.  After traveling in Europe and spending time in Paris, Ward returned to the United States in 1851 and resumed his studies with Asher B. Durand in New York.

While Ward spent most of his time in New Brunswick, he also kept a studio in New York from 1868 to 1872, where he gained a reputation as a genre painter.  Ward created oils and watercolors depicting children, Native Americans, and sports.  Examples of his illustrated stories about wildlife and fishing can be found in issues of the Illustrated London News, Century Magazine, Scribner’s Magazine and St. Nicholas Magazine of the 1870s and 1880s.  Though noted as a prolific artist, fewer than fifty of his works are known today. 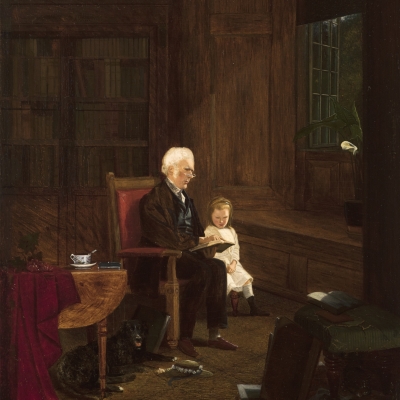