Named after historical British families, Cadurcis Plantagenet Ream grew up in Lancaster, Ohio. He studied in Paris, London, and Munich. After living and exhibiting briefly in Cleveland, Cincinnati, and New York during the 1870s, Ream settled in Chicago, where he was the city’s finest still-life painter. Occasional portraits and genre subjects also make up his oeuvre. His popular still lifes were reproduced as chromolithographs and widely distributed by Louis Prang & Co Cadurcis Ream probably inspired his younger brother Morston Constantine Ream, who was based in New York, to take up still-life painting as well.

Cadurcis Ream’s still lifes often depict fruit tastefully arranged on a tabletop, and he also participated in the Pre-Raphaelite trend of presenting fruit in its natural setting, either hanging from the vine or spread out on green grass. Ream focused on the texture of fruit; as William H. Gerdts writes, “the velvety nature of the fruit, so sensuously painted, is…typical of the artist’s highly engaging and individual approach to color, texture, and paint quality.”[1] Ream also used soft and often indirect light in a way conducive to close and extended looking. 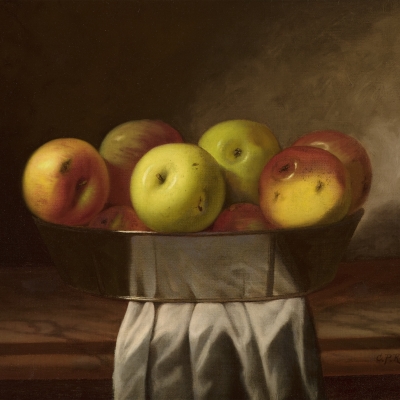