Alice Helm French was born in 1864 in Lake Forest, Illinois. She studied at the Art Institute of Chicago, where she also taught. In 1890, she married William M. R. French, the brother of the sculptor Daniel Chester French, and director of the Art Institute from its founding in 1879 until his death in 1914.

French was more active in the art world later in life, likely after her two sons were grown.  She exhibited at the Art Institute of Chicago from 1906 to 1920.  She lived in a Colonial Revival house in the Beverly Hills section of Chicago. The area surrounding her home was a very popular subject for French, and in 1908, five of the nine works exhibited at the Art Institute were of Beverly Hills, with three titled From my Window at Beverly Hills.  Another pastel with the same setting was exhibited in 1910.  According to exhibition records, French moved to Williamstown, Massachusetts, around 1916, after the death of her husband.

French also created portraits, often in pastel.  She exhibited a portrait in 1909 at the Pennsylvania Academy of the Fine Arts.  Her later exhibitions focused on floral themes: three at the Salons of America in 1934 and two at the Society of Independent Artists in 1931.  She was also active in the Society of Western Artists. 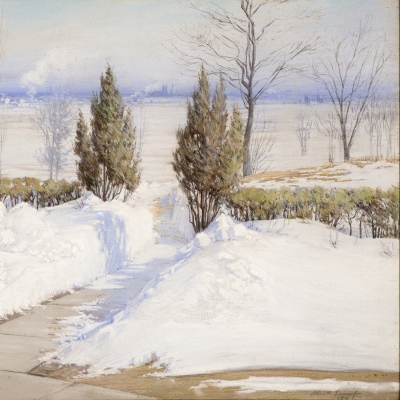