Alexander Pope was born in Boston, Massachusetts, in 1849, amidst the prosperity of an active New England industrial city. While the Civil War ravished the nation, Pope spent his early years close to home. He started working for his father’s lumber business in the late 1860s, and it was during this time that Pope first began to delve into art. One of the most important figures during Pope’s initial years as an artist was William Rimmer, a respected Bostonian recognized for his lectures on art anatomy. In 1875, Pope started to exhibit his woodcarvings of game birds at the Boston Art Club. He also became established for his paintings of champion dogs and famous horses, displaying an outstanding ability to recreate the most minute details of an animal’s physique and spirit. Pope’s progression as an artist evolved into a variety of genres. Throughout the late 1880s, he painted large trompe l’oeil still lifes, a painting technique that literally means, “that which deceives the eye.” Pope reproduced realistic images of hunting and military objects in such a way as to fool the viewers’ eyes into perceiving an image as three-dimensional. This was a highly popular means of creating extremely realistic still lifes, and Pope utilized it often. 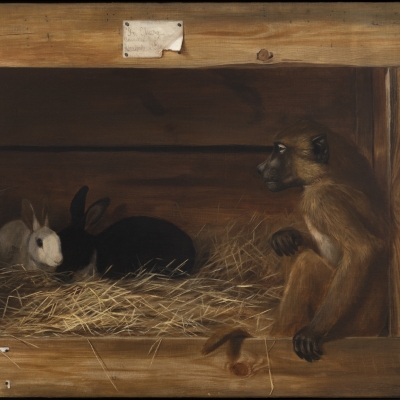